“The story is too slight.”

Thin dark comedy satire of the effects of TV addiction on society by Italian writer-director Matteo Garrone(“Guests”/”Roman Summer”/”Gomorrah“) speaks to us in TV talk and tells us the obvious that we should not lose track of what’s real and what’s not. I had trouble sticking with the slice-of-life realism pic throughout, as it became grating spinning its wheels and going nowhere.

Luciano (Aniello Arena-the screen debut for the gangster, who is allowed to shoot the film during the day while serving out a 20-year prison sentence) is the charming hustler Neapolitan fishmonger, who makes extra bread for his family of three by having his loyal wife Maria (Loredana Simioli) and stable cousin (Nando Paone) help him run a profitable scam operation. When his children insist he use his hammy attention getting performer qualities to try out for the popular reality TV called Big Brother based in Rome, he can’t resist and finagles his way to get a try out by bothering Enzo (Raffaele Ferrante), a former “Big Brother” contestant still living off his brief fame as a contestant winner, to reluctantly arrange for a try out.

Everyone in Luciano’s squalid working-class neighborhood and his extended family, all are taken with celebrity and cherish the program’s ability to make an ordinary person rich and famous. After the Rome audition Luciano returns to Naples and is treated already by the locals as if he surely will be a celebrity. Luciano‘s positive he will be called on the program. But when not contacted, he becomes agitated and delusionally obsessed with getting on the show anyway he can. When Luciano thinks the TV show is sending undercover spies to check on him, he decides to give up his mail-order scam, sell his fish business and give away to the poor his possessions. Maria, she still loves him, but separates when he ignores his family and continues doing charity worth because he thinks that’s his ticket to get on the show.

Enzo treats the annoying Luciano as if he were a pest, as he keeps trying to make contact with him. To keep him away, he throws out shallow mottoes to live by such as “Always believe” and “Never give up.”

At the end of the day, the comedy is not that funny, the story is too slight, the characters are not particularly likeable, and the pic’s satire of the vacuousness of celebrity is without an edge. It left me as bored as if I were actually watching one of those putrid reality game shows. 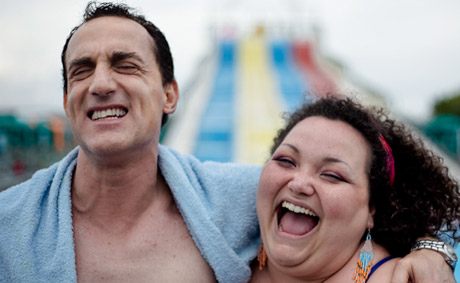