“Rashomon is a film about the lies people tell to protect their self-image.”

This is Japanese director Akira Kurosawa’s international breakthrough film, garnering many awards including Hollywood’s 1952 Best Foreign Language Film Oscar and The Golden Lion Award at the 1951 Venice film festival. The term for Rashomon became incorporated into the everyday language, and Japanese films became a regular part of the western world’s film culture mainly because of this film. The strength of the film lies in its attempt to show how the search for the truth is laden with traps. All four narrators of the horrid event depicted are supposedly telling the truth according to what they believe they saw, but their truths still turn out to be veiled in mystery. In the intellectual scheme of this puzzler, Kurosawa determines that the truth cannot be found because ‘the truth is relative.’

The film is blemished only by Kurosawa’s backtracking at the conclusion, coming up with an unconvincing and hokey humanistic ending to counter his more potent argument that everyone lies for selfish reasons.

Set in the 12th century of the ravaged capital city of Kyoto, the film offers four very different versions of an ambush, rape and murder in the woods. What makes the film special besides its interesting philosophical theme is the high-powered performances, especially the one by Toshiro Mifune as the manic bandit Tajomaru. The frenetic movements of the camera (whether slow or fast paced) also gives the film its sense of urgency. This was a unique filming device used by Kurosawa of zooming in on the character when telling his or her version, as each had a different rhythm that the camera underscored by revealing the particular mood of the storyteller.

Three people are waiting out a rainstorm in a decaying shelter where there is an ancient gate called Rashomon: a woodcutter (Shimura), a Buddhist priest (Chiaki), and a common man (Ueda). They kill some time by listening to a true story told by the priest and the woodcutter. The story was recently told before a magistrate and it shocked both the priest and the woodcutter, as they both lamented how evil mankind has become. The common man says that he is not surprised that mankind is selfish, as he takes a cynical view of humanity, anyway. To him it is just a typical murder story.

The woodcutter tells how he found the body of the murdered husband and then quickly ran back to report it to the police, telling them he just found the body and didn’t see what happened. Later on he will tell the other two what he really saw, unable to contain himself anymore from his version of the truth. This comes after he goes over again in his mind the other three versions told from the viewpoint of the bandit, the woman, and the murdered man through a medium. The woodcutter becomes saddened that mankind has sunk to a new low level of morality and hopes to speak out against that.

The captured bandit will freely confess to the police that he raped the woman and murdered the husband in a gallant duel for her. He sets up his story by blaming a breeze blowing that day for what was to take place. When a beautiful veiled lady (Kyo) astride a horse with her warrior husband (Mori) walking alongside her in the woods comes into his view, a breeze blows the veil away from her. He sees how beautiful she is and decides he must have her, even if he must kill the husband. Though, he says, his intention was not to kill the husband unless it was necessary. He mentions how he lured the husband away from his wife on the main road taking him deep into the woods by telling him he has buried some valuable swords there, which he will sell to him cheaply. When he gets to the isolated spot, he fights with the husband until he overcomes him and ties him up. He then goes back for the woman and admires her for the spirited way she resists him, but soon she encourages him to take her. So he rapes her in front of her husband. She then insists, that to protect her honor, he must fight a duel with her husband and whomever wins will have her. He then kills the husband in an exciting duel for her. But, she flees from the scene and the bandit claims that he didn’t run after her.

The woman’s version is quite different, as each narrator tells a version that makes them look good. In her version, she acted with courage, honor, and dignity. She mentions that after the rape the bandit mockingly laughed at her and ran off into the woods. There was no duel. The husband looked at her coldly after the rape and wouldn’t forgive her for dishonoring him, as she accidentally stabbed him with her dagger after offering him the dagger to kill her. She asks the court, What should a poor, defenseless woman like me do?

The murdered man’s version is presented to the magistrate through a medium. He mentions how after the rape the cunning bandit successfully consoled his wife, who looked more beautiful than she ever looked before. He told her that he loves her and she agrees to run away with him, but not before insisting that he kill her husband. The husband says this despicable act by his wife even revolted the bandit and he adopted the same masculine code as the samurai by throwing the woman to the ground and asking if he wanted his wife slain. He says he almost forgave the bandit for acting so honorable at that point. Meanwhile, the woman ran away and the bandit unsuccessfully chased after her. The grieving husband couldn’t bear his suffering anymore and committed suicide with the dagger.

The woodcutter then tells the men in the shelter his revised version of what happened, which might be the closest we come to the truth since his only motive for lying was greed. But even his version is also not certain, as the woodcutter is a proven liar having stolen the dagger and therefore he covered up his part in the story he told to the police. But he is now seemingly disgusted with the other three versions put forth, which only made the presenter look good and made him wary of mankind. Since the woodcutter’s telling of the story is now more objective, the greater is the chance that it is closer to the truth. He tells the story after the rape and has the bandit pleading with the woman to run away with him, saying that if she marries him he will give up being a thief and get an honest job to support her. Her reply is not with words but to cut with her dagger the ropes that bind her husband, indicating they must fight a duel for her. But instead of fighting the samarai, he chickens out and calls his wife a whore. He further says she is not worth dying for. The wife then gets up enough courage to taunt the two men for being cowards, which gets them to reluctantly start their duel. Both men are frightened and the duel is an awkward and cowardly one, with both men stumbling and retreating. Finally the husband is cringing out of fear and begging not to be killed, as the abject bandit slays him and the woman flees. The bandit soon staggers off bewildered in another direction. The duel was seen as a parody: 1) Of how the brave samurai is supposed to conduct himself. 2) Of how the bandit is supposed to be fearless 3) Of how the woman is supposed to be virtuous. All three participants are shown to have poor character and go against the ongoing heroic myth.

For Kurosawa, Rashomon is a film about the lies people tell to protect their self-image. The truth is subjective and can’t be believed in its entirety because of each narrator’s ego.

To soften the blow of all the cynicism in regards to the rape-murder, Kurosawa suddenly has an abandoned baby conveniently wake up and cry just as all the storytelling is concluded in the shelter. The crude common man thereby steals the gifts the baby was left with and shows no concern for the helpless baby, but the priest and the woodcutter reach out to help the baby. The priest clutches the baby, at first misunderstanding the woodcutter’s gesture to help; but, the woodcutter seeks to adopt the baby as his seventh child. This contrived ending is supposed to show that there are still those who will unselfishly reach out to help others.

The film has not aged that well, though it seems to still have power; but, in my opinion, it is not the masterpiece it was once thought of. I think the same reevaluation will take place of Kurosawa’s long and distinguished career and he will be downgraded a peg from being crowned as one of the greatest directors. He seems to suffer in most of his films from too much sentimentality and contrivances; though his strong filming techniques and very muscular camera work as exhibited in this film, will remain his ultimate trademark. 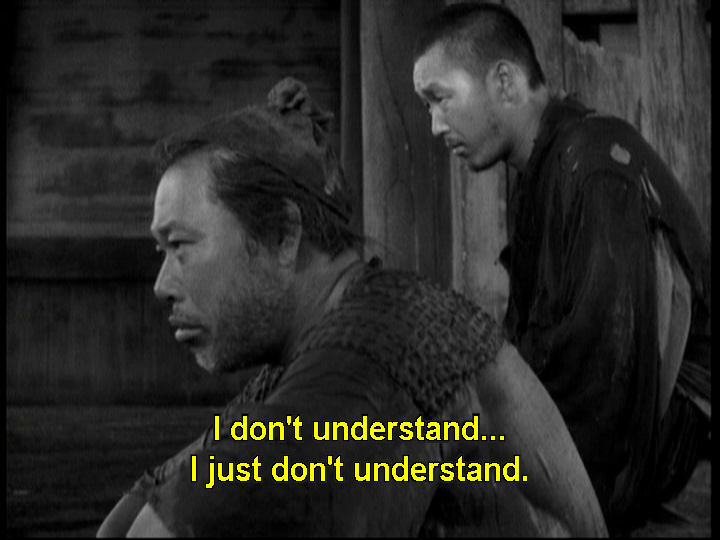