Sally Potter (“The Tango Lesson”/”Ginger & Rosa”/”Orlando”) helms and writes this almost unbearable emotionally-wrought black comedy about the fashion world, that holds to the popular phrase among fashion folks that ‘all is the rage.’ The title Rage comes from that phrase shortened. It wastes a talented name cast as it tells of a murder mystery or two on the runway. It also exploits two of its name stars, by having Jude Law play a super-model in drag and fashion critic Judi Dench smoke a joint.

The premise has a black teen named Michelangelo (never seen or heard), filming diverse characters for his blog from backstage at a NYC fashion show run by the famous designer Merlin (Simon Abkarian). Michelangelo is operating a website used to promote a new fragrance of his. What we get is 14 extended interviews (monologues) into Michelangelo’s cellphone camera from those attending the show. The better interviews include Dianne Wiest as the sullen company manager for Merlin, the real model turned actress Lily Cole who remains cloistered with Merlin, and motorcycle pizza delivery boy (Riz Ahmed) finding that his vehicle caused the accidental death of a model whose scarf got tangled in the wheels of his scooter. After the death, the show is halted. But when resumed another model ends up dead after shot while strutting on the runway. When halted and resumed for a third time, there’s a workers’ protest over the unfair labor practices of the fashion house’s vulgar money-man owner, “Tiny” Diamonds (Eddie Izzard). This incites the protesting youths, following the event on Michelangelo‘s website, to destroy the show and those connected with it.

Hard to generate any real feelings for this unrealistic pic and its puzzling agenda and its peculiar characters. Though well-directed and surprisingly well-written, it seems an exercise in futility–one that is neither entertaining, edgy nor purposeful. What the unremarkable film lacks is the energy to run with this offbeat look at the fashion world, used as a metaphor for the failures of globalization. 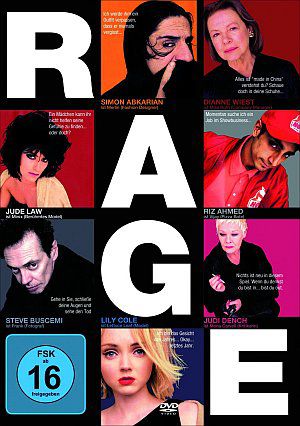