“Dern gives a moving performance as the beleaguered runner.”

An overlooked Bruce Dern and Pam Gier drama that could be decent if it didn’t get so sappy and follow so much along the sports film formula route. Rob Nilsson(“Northern Lights”/”Attitude”/”Go Together”) directs and co-writes it with Roy Kissin.

Pro middle-aged marathon runner Wes Holman (Bruce Dern), banned from the Olympics twenty years ago for attempting to rat out secret payoffs to athletes, trains hard to win the grueling Cielo-Sea Race, in California. It’s America’s second oldest race. Wes must run over the mountains from Mill Valley to the Pacific to win in his over-40 age group.

Wes teams up with his former coach Elmo (John Marley, in his last role) and former girlfriend, an aerobic’s instructor, Cora (Pam Grier), to train. Bill Bailey plays Wes’s West Coast leftist union organizer father. The runner feels he has something to prove to both older male authority figures.

The main part of the movie shows Dern in training. It ends with the big race, whereby Dern makes his statement about sports and life.

Dern gives a moving performance as the beleaguered runner. 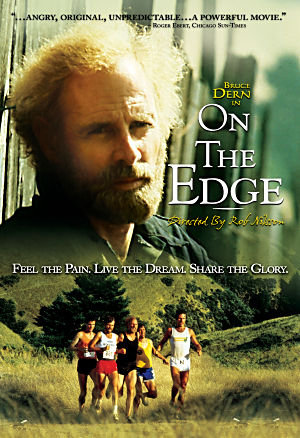