“It was quite enjoyable in a less than biting way.”

Rose is taken to the nearby private Keloid Clinic, run by plastic surgeons Dan and Roxanne Keloid (Howard Ryshpan and Patricia Gage) and their business partner Murray Cypher (Joel Silver). Murray is talking to the doctors about their business expanding and becoming a plastic surgery franchise just as the accident is taking place. Because Rose is in critical condition and will probably die in a short time, Keloid does an emergency experimental procedure to try and save her. It’s a radical grafting of her thigh tissue, inducing a morphogenic, which means that there is the ability to form any kind of tissue in her system. It results in a botched operation and the side effect that occurs is freaky indeed — she develops a fanged phallus under her armpit. With this new organism, she has the urge to bite her victim and draw blood from them to get nourishment. She thereby infects them with an incurable type of unknown rabies whereby the victim forgets what happened and becomes like a zombie and goes mad, ready to bite the next victim. Rose will be the source of a plague that sweeps across Montreal and forces that city to be under martial law. Hart had only a few broken bones and is sent home to recover, where he spends his time worrying that his girlfriend is in a coma.

Director-writer David Cronenberg (Shivers) is obsessed with the connection between sex and body functions. He has some fun with this theme, taking on the subject matter with mock seriousness, showing a series of attacks caused by Marilyn. The first bite victim is Lloyd Walsh, who is pounced on by the writhing Marilyn as she gets up from her coma in her hospital bed and manages to sexually arouse the patient who only wanted to calm her down after he heard her screams; she then bites a drunken farmer who tries a little hanky-panky with her in the barn, where she has her arms wrapped around a cow; and after she bites the farmer, he goes into a diner and attacks the customers; she then attacks Judy Glasburg in the sauna, who is awaiting an unneeded cosmetic plastic surgery; and, finally she sneaks out of the hospital and lures a kind-hearted truck driver, Smooth Eddy, to give her a hitch before he gets his rabid bite. As the rabies spreads to the general population a random attack in a crowded subway car occurs and then my favorite attack, the one in a mall, where Santa gets shot in the fracas as the police go after the biter of another vic. There is also an incident in the porno theater, which could have been funnier. It had Marilyn Chambers sitting alone, the only woman in the theater, when a guy with a long trench coat hovers over her and caresses her and moves to sit next to her for sexual favors, and naturally gets what he deserves.

Since there is no cure for this rabies, the police are ordered to shoot the bite victims and their bodies are carted away in garbage trucks. The film ably depicts the city in a panic and shows the victims foaming at the mouth, reduced to madness. These scenes are mostly played for shock value, but have a certain sophisticated humor and relate a concern about medical procedures, alerting us to the fact of life that doctors have the power to do just about anything to their patients. One of the film’s main faults, is that it offered no characters that we could care about. It instead developed an offbeat story that had some kind of political message hidden in its humor. It was quite enjoyable in a less than biting way. 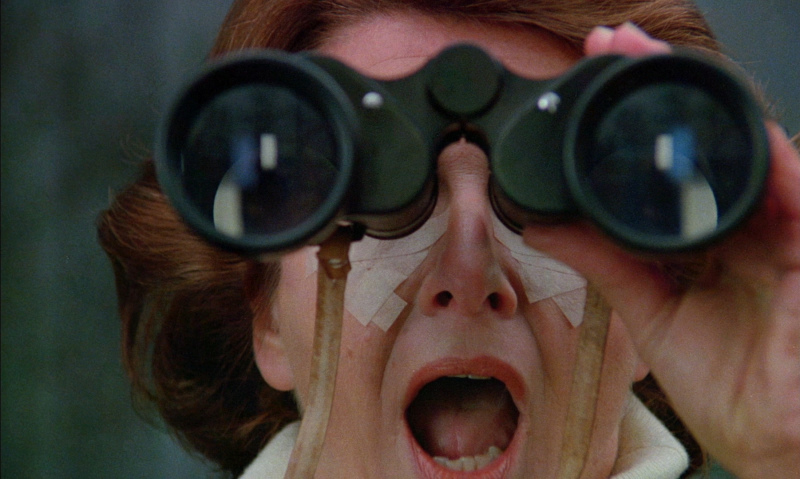