“An intense tale of a couple grieving from the loss of their 4-year-old son in a car accident.“

Based on David Lindsay-Abaire’s adaptation of his Pulitzer-winning play, “Rabbit Hole.”It’s an intense tale of a couple grieving from the loss of their 4-year-old son in a car accident. Director John Cameron Mitchell (“Shortbus”/”Hedwig and the Angry Inch“) sustains a lugubrious mood throughout, even when there’s black humor to mock the group therapy sessions. It’s the kind of pic that insists the viewer share the couple’s heartache or else the pic is almost an unbearable watch.

The well-off Hudson Valley, New York, suburban couple,executive turned housewife Becca (Nicole Kidman) and her businessman hubby Howie Corbett (Aaron Eckhart), are trying to get their lives back in order in the wake of losing their beloved young son Danny in a freakish car accident eight months ago, but are both in their own way stuck wallowing in their grief. The couple attend group therapy sessions, but are not comforted in hearing other tragic stories. When one couple comfort’s themselves by saying that God took their child because he wanted an angel, Becca bolts the group.

Memories of their son constantly surround the couple, who are filled with remorse and guilt. Becca goes through big mood swings while choosing to eliminate all signs of her son; while Howie does all he can to keep the memories of his son alive, including keeping a video of his son on his cellphone. Things get more intense when Becca meets with the high school student Jason (Miles Teller), whose car struck her son when Danny ran out to chase the family dog. Jason tries to cope with his sadness by creating a comic book based on parallel lives, which makes Becca see how sad he feels as they meet regularly at a park bench. Meanwhile the more extroverted Howie contacts a long-suffering group member, Gaby (Sandra Oh), to share his grief, and ends up telling the pot smoker he loves his wife and wishes things were back to the days when they were so happy as a family.

We are left wondering if the pained couple can save their now damaged marriage and find a way to get back to returning to their everyday lives despite their loss. How they do it in such a sanctimonious way, was a turnoff.

The fine acting captures the raw nerves of the couples’ experience, and the tragic story makes sense in the way it captured such guilt-stricken vics losing their grip on life. Nevertheless I can’t say I enjoyed watching the couple grieve or got much out of their experience, as I seemed only to be pretending to share their grief and couldn’t wait for the pic to end so I could shake off the downer mood laid on me. The intimate trip the couple takes should mainly interest those with similar interpretations of their experiences. For me, it played like a dirge as it dragged me down its rabbit hole of recriminations and loss. 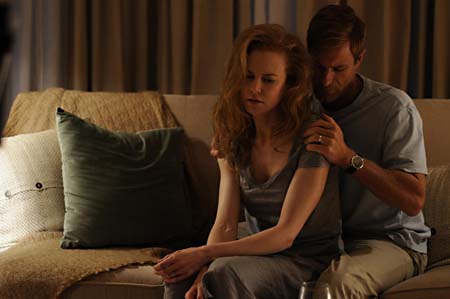