“The main reason it’s worth watching is to catch a sleazy Peter Lorre in action.”

Irving Pichel (“Santa Fe”/”Martin Luther”/”They Won’t Believe Me”) helms in a workmanlike manner this fast-paced, suspenseful but minor film noir. It’s written by Robert Smith. The main reason it’s worth watching is to catch a sleazy Peter Lorre in action.

Santa Monica auto mechanic Dan Brady (Mickey Rooney) is stuck at a dead-end job for a skinflint boss named Mackey (Art Smith). Dan just jilted his nice girlfriend Helen (Barbara Bates) because he doesn’t want to give the lovelorn gal the runaround. At the local coffee shop, Dan gets a date with the hottie new cashier Vera (Jeanne Cagney, sister of Jimmy) but discovers he doesn’t have enough money to take her out. When Dan can’t get a loan from his pals he’s reassured by his charter fishing pal Buzz (Jimmy Dodd) that he will give him back the money tomorrow he owes, so he robs the register at his workplace feeling confident he will return the money the next day. The next day Dan discovers the bookkeeper arrives a few days ahead of schedule to examine the books and Buzz took out a fishing party. To pay the money back, the panicky Dan buys an expensive watch on the installment plan and hocks it. Only thing the jeweler discovers this and uses the fine print in the contract to make the gullible Dan buy the watch within twenty-four hours or he will be arrested for grand larceny.

At a bar, the depressed Dan on an impulse mugs in the parking lot the drunk bar patron (Sid Marion) he followed from the bar to the pier. The only problem is that Dan’s seen by the movie cashier, whose screams bring the police. The next day the corrupt owner of a penny arcade on the pier, Nick Dramoshag (Peter Lorre), the former employer and boyfriend of Vera, blackmails Dan. The panic-stricken mechanic is now forced to steal a car from his boss to stop Nick from ratting him out to the cops. Mackey then threatens Dan that he knows he robbed the car and that he either return it tomorrow or pay him $3,000.

Femme fatale Vera informs Dan that Nick keeps a lot of cash in a room in the arcade, and Dan robs him that night. But Vera uses her half of the loot to buy an expensive mink coat, which leaves Dan with not enough to pay for the car. He goes to see Mackey anyway at the deserted garage, but after Mackay takes the cash he pulls a gun on Dan and starts to call the police. Dan overcomes him and then strangles him, and after realizing that Vera is a gold-digging tramp and not worthy of his love he goes with Helen to Mexico. It ends with a surprising happy ending, as a kindly lawyer (Taylor Holmes) that Dan forces to take him by car to Mexico gives him sound advice and tells him if Mackey lives he’ll probably only get a sentence from 1-to-10 years. When the police catch up with Dan as he tries to get Buzz at the Santa Monica dock to take him to Mexico, they only wing him in the shoulder and inform him that the strangled Mackey will live.

With Rooney going against type from his usual clean-cut Andy Hardy roles, the date-gone-wrong film bombed at the box office. It has since become a a cult favorite among noir fans. 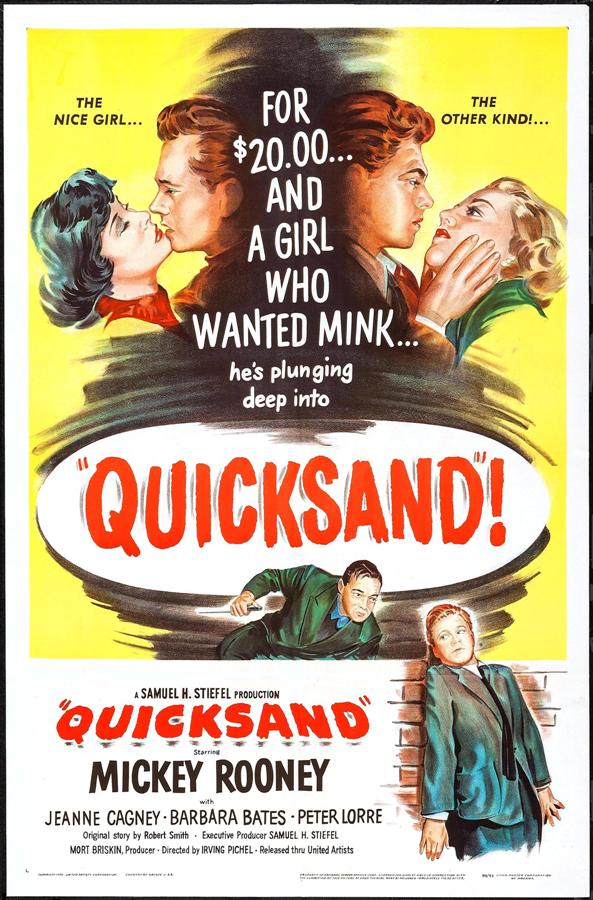