Veteran B-film director William Berke (“Gunfire”/”Rolling Home”/”Deputy Marshal”) directs and Carroll Young writes the screenplay for this formula adventure tale of small pleasures that is the fifth out of thirteen in the Columbia Picture series. The pic is based on a long-running newspaper comic strip by Alex Raymond and Don Moore, the creators of the Flash Gordon strip. Johnny Weissmuller hung up his Tarzan loincloth at age 44 in 1948 and traded it in for his Jungle Jim khaki garb, as he stars in this series.

In this diverting tale Jungle Jim (Johnny Weissmuller) helps a U.S. Army expedition, led by Major Bolton (David Bruce), into pygmy territory to locate a missing WAC, Captain Ann Kingsley (Ann Savage), an expert in tropical plants, who located the ngoma plant in the pygmy territory and discovered its fibers would make a stronger rope and have other more valuable uses for the military. But foreign Communist agent Leon Marko (Steven Geray), posing as a jungle trader, has his white operatives pose in costume as the Bush Devils, the once feared enemy cult of the pygmies, which keeps the Captain staying with the friendly pygmies in their secret hideout and unable to contact the Army.

With the help of the pygmies, especially its intrepid leader Makuba (Billy Curtis, noted midget star of The Terror of Tiny Town), the good guys overcome Marko’s efforts to steal the valued fibers and thwart the Americans from their mission. Along the way Jungle Jim must wrestle with a gorilla, survive an elephant stampede, uncover that the Bush Devils are only white men dressed in costume, rescue the missing WAC from Marko and come out of the quicksand to foil the baddies.The only reason the Army expedition is there is because Jungle Jim found her dogtags and the rope, and send them to the Pentagon.I’m telling you, that Jungle Jim might not be Tarzan be he’s still quite a hero. 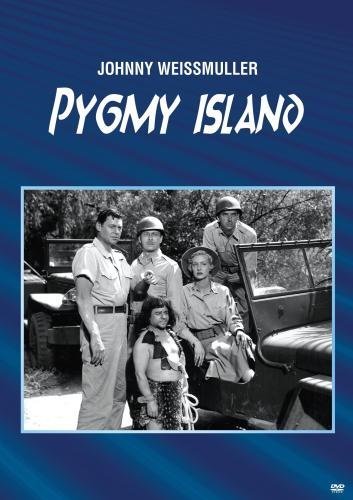