Alain Resnais (“Stavisky”/”Providence”/”Mélo”) handsomely lays on us an accessible and emotionally charged theatrical wryly comical melodrama about six lonely diverse characters searching for love in a snowy Paris, who are all so alienated in their hermetic urban setting that they find the snow poetically falls inside their apartments. It’s adapted by French playwright Jean-Michel Ribes from the recent play by British playwright Alan Ayckbourn, with the setting changed from London to Paris.

Handsome, hunky Dan (Lambert Wilson) three months ago was forced to leave his career Army post over his emotional problems and is now unemployed and is drinking heavily rather than trying to face his problems. He lives in the cramped flat of Nicole (Laura Morante), his pretty but perplexed fiancée; their lack of communication turns her off and after searching in vain for a quick fix of their relationship problems through obtaining a larger flat, with kindly real estate agent Thierry (André Dussollier), she gives him the gate. The elderly bachelor agent Thierry is smitten with his younger assistant Charlotte (Sabine Azéma), a practicing Christian who moonlights as a caregiver for the unbearable abusive invalid father (Claude Rich, who is never seen onscreen) of nice guy sad-sack widower bartender Lionel (Pierre Arditi). Charlotte lends Thierry an inspirational Christian tape she recorded of her favorite religious program and at the end of the tape she forgets to erase some shocking porno-like shots of herself lewdly dancing. When Thierry falsely interprets this by sexually coming onto her in the workplace, she rebuffs him and their friendly relationship has a chill come over it. Thierry lives at home with his much younger frustrated and poutish sister Gaëlle (Isabelle Carré), who is desperately trying to find a real man and goes on lonelyheart dates through personal ads without telling her brother. On one of those dates she meets Dan, who takes her to his favorite bar and the two for the moment think they made a love connection even though they are both quite drunk. But as the French title Coeurs suggests, this is a film about heart-break and that’s what it all leads to without a much deeper meaning intended or for that matter necessary.

The film’s stunning visuals (it was shot in ‘Scope) are one of its strong points; the wonderfully pastel interior shadings, especially in the bar where Lionel works and Dan does his drinking, is a feast for the eyes. Also, the strong ensemble cast joyfully go through the airy material and keep things deeply affecting in a way most Hollywood relationship films only screw up. Anyway you slice it, this is a richly flavored artifice that nevertheless realistically maps out the heartfelt urges of its sympathetic characters and tempers it by boldly suggesting that chance (in this case, being in the right place at the right time) often is the most important determinant of a good relationship rather than love. 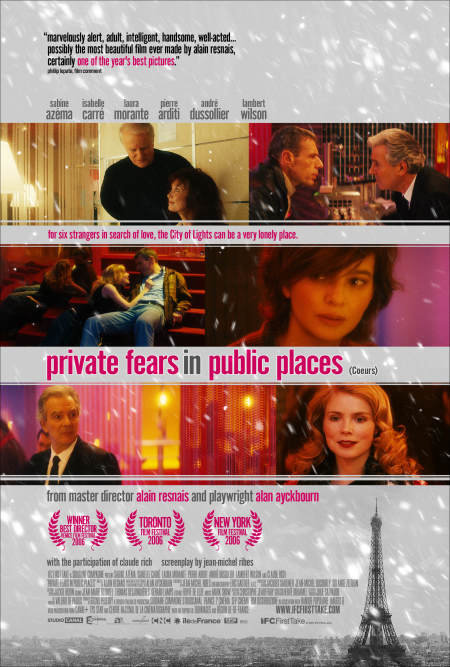