PRIDE OF ST. LOUIS, THE

Corny, old-fashioned biopic about a colorful, uneducated baseball player during the 1930s and 1940s from Arkansas named Jerome Herman “Dizzy” Dean (Dan Dailey) that never gets past the genre’s formula and its loose interpretation of Dizzy’s life never gets past its slo ball banality. It’s modestly directed by Harmon Jones and written by Herman Mankiewicz (co-scripted Citizen Kane) and Guy Troper. If you don’t like baseball, you probably won’t like this pic. But even if you do like baseball, you might not find the loudmouth main character that appealing.

It follows the usual trajectory of tracing the subject’s humble beginnings until his career success and then with the subject having to deal with a hardship. The brash non-stop talking Dean (whom I found obnoxious) is seen pitching in a hick game in the Ozarks in 1928 and signed by a scout to a Texas League contract with the Houston Buffaloes, the St. Louis Cardinals’ minor league affiliate. There Dean meets Pat Nash (Joanne Dru), who works as a clerk for a credit manager in a department store, and they soon marry. After a few years in the minors and now nicknamed Dizzy because of his zany behavior, Dean is called up to the Big Leagues and becomes the Cardinals’ ace of the staff. He’s soon joined by his younger brother Paul (Richard Crenna), after much lobbying by Dizzy, who is dubbed with the nickname “Daffy” by the press. Dizzy and Daffy become the country’s favorites after their success in leading the Cardinals to victory in the 1934 World Series and their knack for pulling off publicity stunts. Then things go steadily downhill for Dizzy, who injures his arm and gets traded to the Cubs. When he can’t pitch anymore, he wallows in self-pity and is sent down to the Texas League. There he starts neglecting his wife and falls further by drinking and gambling until his old friend who idolizes him, Johnny Kendall (Richard Hylton), convinces his brewery executive dad to sponsor the St. Louis Browns radio broadcasts and hire the colorful Diz as a color analyst. Though his down-home poor grammar is challenged by a group of schoolteachers, as they put the pressure on the station to can him. After he announces over the air that he will quit rather than do harm to the schoolchildren, his foes relent and Dean becomes a fixture as an announcer. Future NBC news commentator Chet Huntley shows up near the conclusion as Dizzy’s fellow sportscaster on KWK. 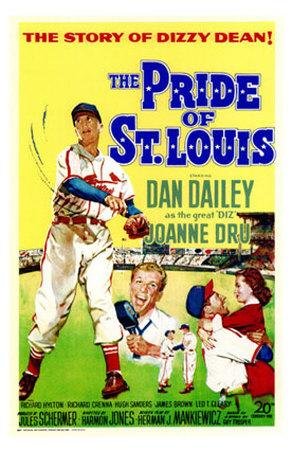