“It’s not easy to make a film that stars such attractive women and make it so unappealing.”

This kitsch Hammer picture is directed and written by Michael Carreras (“Maniac”/”The Lost Continent”/”The Curse of the Mummy’s Tomb“). He’s the son of Sir James, the head of Hammer Studios.The prehistoric exploitation film has great native chants, good Technicolor, the lure of the exotic Martine Beswick and plenty of scantily robed beauties; but it also has a time-shifting story that’s for the birds, dialogue that’s absurd and a wit that’s feeble.It remains in view today only because it’s worshiped as a cult film by some pulp film types. During its theater release it bombed with the critics and at the box office, the initial low opinion of its worth still holds.

David Marchand (Michael Latimer) is an Englishman leading a safari in Africa for fellow Brits. When a client wounds a leopard, the compassionate white hunter goes after it to put it out of its misery. He kills the animal in a forbidden part of the jungle, where a native tribe worships the once great White Rhinoceros. Because he’s hunting on sacred grounds, the hunter is sentenced to die. Before they carry out their sentence, David touches a statue of the White Rhinoceros and is magically transported back in time to a strange prehistoric land ruled by brunette Amazon women. The brunettes have enslaved all the blonde women, claiming to do so because at a prior time they were enslaved by the blondes. Their cruel leader is Queen Kari (Martine Beswick), who wishes to make David her personal slave. David resists, as he’s already fallen in love with blonde slave girl Saria (Edina Ronay). Placed in a dark dungeon with other chained white male prisoners from the north, David escapes in time to save Saria from being sacrificed in a tribal ritual by those nasty brunettes and then witnesses a wild white rhino gorge Queen Kari to death. Once free from the cursed land, David returns to the present. In his camping grounds, he’s in store for a nice surprise from his latest client.

It’s not easy to make a film that stars such attractive women and make it so unappealing, not to say also so humorless and so worthless. It’s a sequel to the popular caveman pic One Million Years B. C. (1966), that starred Raquel Welch. 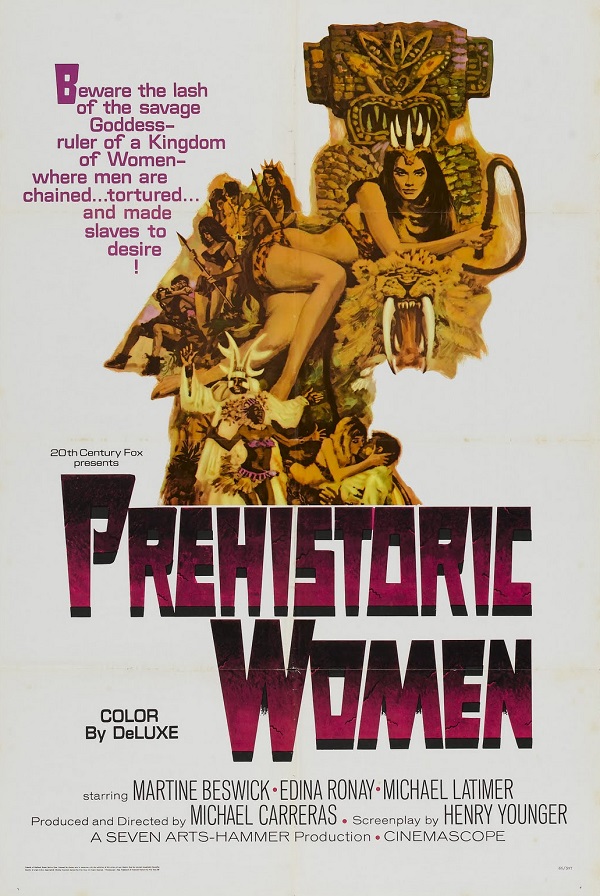