“A grizzly serial killer thriller that’s not too exciting on film even if it might have been in the book.”

A grizzly serial killer thriller that’s not too exciting on film even if it might have been in the book. Bosnian director Danis Tanovic (“No Man’s Land”) is the wrong director for this action film. His direction is awkward and unsure of how European trashy he wants it to be (it ends up being tasteless and disposable). What is right about the film is the great Swedish location shots by the noted cinematographer Salvatore Totino. The screenplay by Andrew Stern and Ellen Brown Furman is based on the 2010 best-selling novel “The Postcard Killers” by James Patterson and the Swedish mystery writer Liza Marklund.

There’s a serial killer murdering young married couples in different European cities. Each killing comes with a postcard sent to a local journalist with a brief message about love (such as “Love will never die”) and a warning that there would be others killed in the same way.

Jacob Kanon (Jeffrey Dean Morgan, TV actor) is a veteran NYC detective whose daughter was a young bride killed with her husband on their honeymoon in London, and while dead were used to pose nude in the manner of some well-known painting shown in the European museum for future postcards. The detective goes to Europe to unofficially investigate. There he’s rejected by the English police as an American meddler, who does things not by the book. But he eventually gets helped by the police inspector Klaus Bublitz (Joachim Król) and joins forces with the American reporter, stationed in Stockholm, Dessie Lobard (Cush Jumbo), who received one of the killer’s postcards.

Meanwhile Kanon’s ex-wife Valerie (Famke Janssen, in a small and not fulfilling part) remains in New York to do her own investigating.

A perpetually morose and belligerent Kanon discovers that in Madrid a newly married couple were killed and mutilated. Also similar killings took place in Munich, Sweden and Brussels.

Kanon makes contact in Britain with a young American couple on a backpacking vacationing, Sylvia and Mac Randolph (Naomi Battrick and Ruairi O’Connor), and is told they’re suspicious of the heavily tattooed and bearded traveler Pieter (Dylan Devonald-Smith), they met on a train, who asks about their travel plans–fearing he could be the killer. Pieter will later in the journey be joined by his girlfriend (Sally Harmsen).

There’s no flow in the execution of the narrative, its events are contrived and the foreign director seems clueless on how to manage an American commercial venture that demands action and movement. It’s inferior to even most television crime shows. 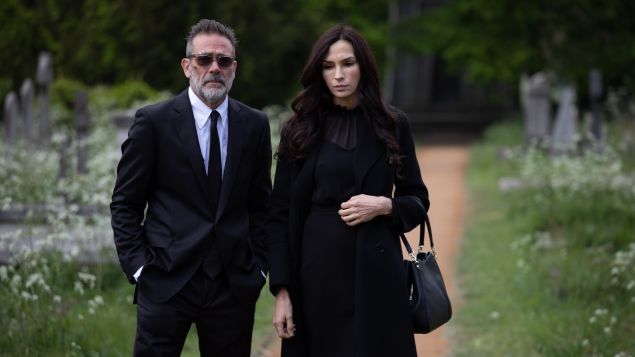