“The vistas are beautifully photographed, as it’s shot around Mount Whitney. That’s where the Hopalong Cassidy series filmed.“

Herbert Coleman(“Battle at Bloody Beach”) directs this routine Western that’s based on the novel by Clair Huffaker. The vistas are beautifully photographed, as it’s shot around Mount Whitney. That’s where the Hopalong Cassidy series filmed. The pic is too schematic to be more than mildly diverting, as it becomes too talky and hands out a series of lectures on the trail when the action halts on how to deal with evil, violence and people who are rotten. It’s final message is that there are enough good people to be found, if you look hard enough.

In 1880 four unhinged convicts serving time for murder, led by the snarling Crip (Vic Morrow), bust out of the Sedona prison and in Paradise, Arizona, rob the bank of $11,000, kill the marshal (Ward Ramsey) and three other citizens in cold-blood, and kidnap and rape a shamed Helen Caldwell (Zohra Lampert). Town leader Benson (James Bell) acknowledges the marshal’s deathbed wish to deputize his old gunslinger pal Banner Cole (Audie Murphy) to lead a posse and thereby give him a chance to find redemption for his errant ways.

Most townies chicken out, so only seven sign on to join the hard-boiled determined stranger’s posse. Before long it’s determined that Captain Brown (Robert Keith), suffering an injury, must be sent back because he’s an incompetent determined to lead the posse and does everything in his power to wrest control from Cole and ruin the mission. The kidnapped girl’s Uncle Billy (Royal Dano) takes her back to town when the psychologically crushed vic is found acting suicidal in the desert. Big talking gun crazy Wiley (Paul Carr) freezes during the action and is shot dead, while Hogan (Frank Overton) returns to town after Cole killed one of the outlaws. Hogan tries to justify his retreat by claiming he was the one who got his brother’s killer and has no reason to ride any more with the posse (the truth is that his brother’s killer is still on the loose). Soon the only ones left on the posse are the good guys–Cole, a tenderfoot NYC banker named Seymour Kern (John Saxon) and a Mexican cowhand named Johnny Caddo (Rudolph Acosta). Seymour was bullied into going by the bank president (Ray Teal) to watch the money, but acts with courage despite his limits as a cowboy; while Johnny rides with the posse because it’s the right thing to do.

Thankfully the action sequences are well-executed, Audie is an iconic presence and, supposedly, after NYC method actress Zohra Lampert was told privately by Audie to just read the lines from the script and not go through making up her part, she was at least bearable. 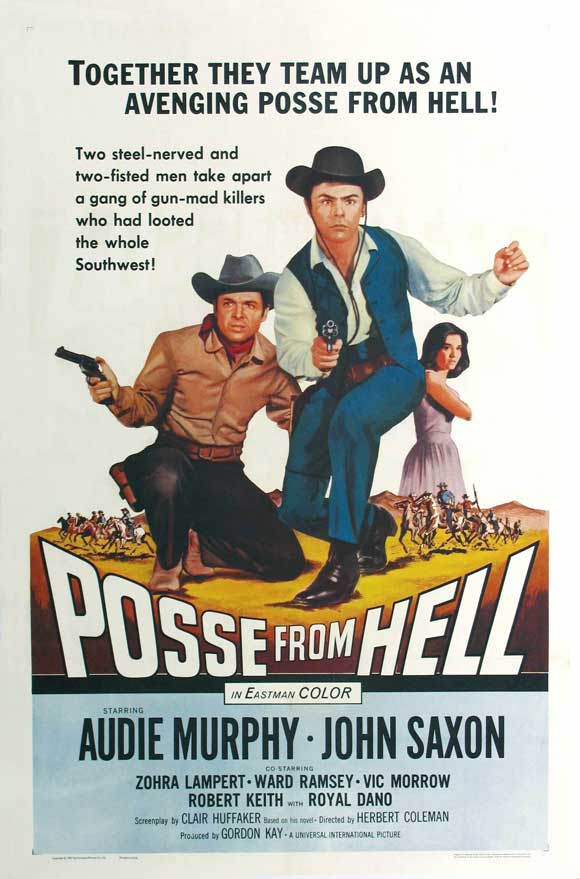