“An honest look at sexuality as perceived by women.”

Artful New Zealand-born director Jane Campion (“Holy Smoke”/”The Piano”) brings Susanna Moore’s 1995 popular psychological thriller to the big screen with forceful feminist undertones regarding the price of sex that must be paid for a single woman in her forties and forces the viewer to react to the presence of sexual violence in relationships where the woman is the vic. The work is scripted by both Campion and Moore, and is a jarring and lurid tale involving the investigation of a brutal slasher serial killer in NYC. A film that plumbs the inner depths in its psychological dramatization of its lonely heroine who chances to walk on the dark side and gets more than she bargained for. It manages in its best moments to evoke serious thoughts about traditional feminist arguments about what men want from a woman and vice versa. The gloomy mystery story is not air-tight, as it’s built on too many coincidences and events fitting too neatly in place for the plot to develop properly. But the relationship between the crude tough homicide detective Giovanni Malloy (Mark Ruffalo) and the well-bred English schoolteacher (I think in a community college!) and writer Frannie (Meg Ryan, who is 41) is brilliantly portrayed and anchors the film allowing it to withstand its flawed plot line. It is one of lovers crossing class lines out of curiosity, with each not trusting the other but feeling something warm inside they might never have felt before that keeps them coming back for more. It’s a moody tale that asks questions in a way that can’t help but be disturbing, as its resolutions are never dull and are filled with familiar boy-girl situations disclosed again and surprising shockers about contemporary city life’s changing mores.

Frannie crosses the bounds of teaching ethics or at least common sense by meeting in a seedy pool hall/bar, the Red Turtle, with her burly black student named Cornelius Webb (Sharrieff Pugh), who is a troublesome inner-city jive artist turning in a term paper smeared in blood that naively believes John Wayne Gacy, the infamous serial killer of boys, was innocent. The student is sexually aggressive with plenty of come-ons while teach seems to enjoy the sexual lure she has over her imposing Negro youth, as she is supposedly doing research of slang words for her book. When Frannie goes to the loo in the dinghy basement, she pauses to intently watch in the dark shadows a lady with blue fingernails give head to a guy she can only recognize by the tattoo of a “three of spades” he has on his wrist.

The lady with blue nails was gruesomely murdered at the bar and the victim’s body was chopped up and a piece of the torso was found in the garden under Frannie’s window in the rundown Lower Manhattan tenement building where she resides, that is next door to a $5 psychic-reading parlor. Frannie lives in a prisonlike state, as the apartment windows all have bars as does the building’s front door. Malloy is the investigating homicide detective who wants to question her as a possible witness. Inside Frannie’s cramped apartment the detective uses his street smarts to see if he can score this intriguing hot number, as he smells easy sex. Frannie’s someone Malloy considers better educated and of a higher station in life, and is viewed as a feather in his cap if he can hit a home run. Frannie becomes strangely aroused with both sexual and intellectual curiosity when she hears the victim was murdered in the Red Turtle and was ”disarticulated,” as the vic’s throat was slashed in the decapitation. She also spots the same wrist tattoo on Malloy, who says he was never in the Red Turtle before. Slightly confused about how to take this cop who makes her hot but nevertheless she suspects he might be the killer, as she consults with her promiscuous half-sister Pauline (Jennifer Jason Leigh). Sis lives in the same seedy neighborhood above a strip club, and urges the socially maladjusted Frannie to go for it and let passion rule her life.

Also hitting on Frannie is her manic, shaggy looking, would-be doctor ex-boyfriend, John Graham (Kevin Bacon), whom she has dumped because he’s so jittery and intense. He seems to be stalking her, as he shows up in situations that make her feel awkward.

Malloy’s detective partner is a vulgar macho Puerto Rican named Rodriguez (Nick Damici ), who has his gun taken away and is forced to do office work because his wife brought him up on charges of beating her. Frannie’s revolted by his cavalier sexist attitude and his violent nature, but doesn’t know how to confront him.

All four of these men might be the killer, as the confused Frannie must fight off her loneliness and doubts and memories of her womanizing father who left her brokenhearted mom (scenes shown in black and white flashbacks) to find her peace of mind. While riding the subway she’s engaged by the vivid dark poetry passages in an ad campaign called Poetry in Transit, and is reminded of how alive her imagination is even though she’s a little too timid to act out all her fantasies except in the manner of a writer who does so in a mind-fuck.

This edgy film grounded in harsh urban reality is a change of pace for the peppy commercial-minded actress Meg Ryan, who sheds her clean-cut image and sinks her teeth into a demanding but unsavory role that calls for nudity and acting out her sex fantasies and revealing a mind that can be sometimes in the gutter. A far cry from her career of mostly frothy pics. It’s a daring career move and Meg shows she’s up to the task, as critically this is her best acting performance so far. But it’s one that will most likely disappoint many in her fan base, those who have come to expect something else from the crowd-pleasing and uplifting actress. This role will probably not win over the masses, as it’s too upsetting to see how twisted she is as a damsel in distress and how desperate her life seems and how unsettling are all her lifestyle decisions. Meg took over the role when Nicole Kidman declined because of her upcoming divorce. Mark Ruffalo gives an equally stirring hard-edged performance as someone you are not sure what he’s up to, but one that is in sync with Meg’s jolting performance. The chemistry between them is sizzling, affectingly sleazy, sometimes tender and mostly unpredictable. The best yearly tandem performances to date. Frannie’s weak spot is her cravings for sex and this makes her vulnerable, as we see how it causes her to make bad decisions in her search for a stable father-figure as a lover. This modern film noir is more exciting as a work revealing the risks there are for the modern urban women, a topic that’s rarely covered in cinema, than it is as a murder investigation. If you can walk away from several weak plot points, this film should look a lot better and be viewed for what it is–an honest look at sexuality as perceived by women. 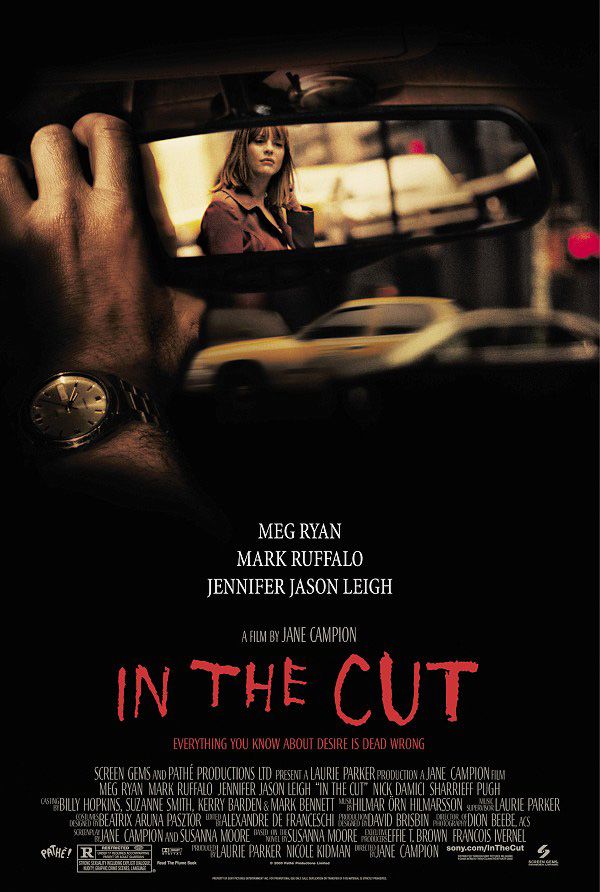