An unknown Yul Brynner, with all his hair, in his first film role, plays a well-spoken, smug narcotics smuggler named Paul Vicola. It’s directed by Lazslo Benedek (“The Wild One”/”The Night Visitor”/”Death of a Salesman”) in a voice-over documentary style. It’s based on the story by Bert Murray and written with a hard-edge by Eugene Ling. It generates an authentic sinister atmosphere, having been filmed on location in New York. The police investigation procedural drama plays as minor film noir, that follows along the usual routine lines for such Eagle-Lion cheapie crime stories.

The passenger ship S.S. Florentine arrives in New York and it’s soon found that the ship’s purser was stabbed to death and thrown over the side, and it’s also discovered a big shipment of medical drugs headed to hospitals and medical labs in the area has been stolen. John J. Meredith, the Treasury Department supervising agent, coordinates the investigation assignment to involve three government agencies–customs, narcotics, and the Coast Guard. Meredith assigns his ace federal agents Jim Flannery (Richard Rober) and Mickey Waters (Scott Brady) to be in charge of the investigation. They receive a call from the nervous girlfriend of the drug boss named Vicola, Toni Cardell (K.T. Stevens), offering a tip on the missing drugs from the S.S. Florentine. Toni was aboard the ship working for Vicola and now the greedy woman wants no part of him since the murder, except to get paid off and vanish. When Vicola refuses to pay her until later, she is willing to inform the feds for the reward money–then planning to skip town for the West Coast. She’s strangled to death by a suspicious Vicola before she can blab, but the feds piece together that there’s a drug shipment stored in the locker of nearby Penn Station. The feds watch the locker and tail the drugs to second-rate nightclub performer Dolly Carney (Arthur Blake), and sweat some info out of him such as gangster Leo Strasser (William Challee) hired him and that the rest of the drugs are hidden in a yacht by the unknown to him big boss. Carney’s moronic girlfriend, Lili Long (Lynne Carter), a dancer at the gangster-run nightclub, goes to Leo for help and is directed to Vicola. This gets her boyfriend bailed out by the drug gang and then thrown out of a hotel window by his pal Leo.

The feds scheme to infiltrate the gang, but Mickey is detected snooping around the docks and is violently killed. Flannery then poses as a Canadian drug dealer working for a San Francisco crime ring and meets with Vicola on the yacht to close the drug deal. When things go wrong, the feds are on hand to come in the nick of time to save the hero agent.

Not much to get excited about, but it does feature an early acting part by Yul Brynner as a ruthless gangster. It’s interesting to note that Chet Huntley did the narration, this being a year before he would be a recognized co-anchor on the NBC Nightly News show–better known as the Huntley-Brinkley Report. 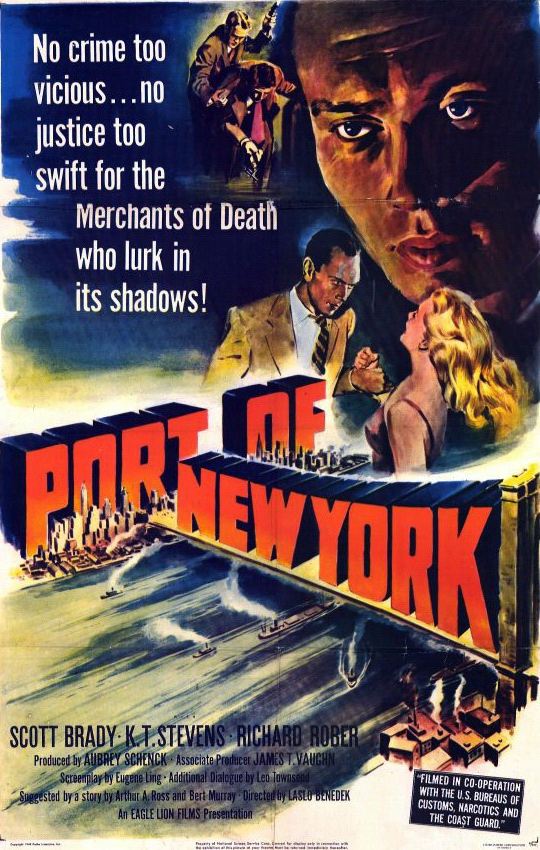