LADY IN THE DEATH HOUSE

“It’s only noteworthy because it stars Lionel Atwill.”

The film is told in flashback as noted criminologistCharles Finch (Lionel Atwill) tells four reporters of the time he saved the life of the innocent Mary Kirk Logan (Jean Parker) at the last minute, who was to die in the electric chair in an hour and he desperately acted to track down the real killer and get the governor to halt the execution once he got the confession.

Mary’s deceased father Tom Logan worked in the bank of the conservative Gregory, but disgraced the bank when arrested for running an illegal pinball machine racket on the side. For the last five years Mary worked in the same bank under the alias of Mary Kirk, something Gregory was unaware of and if he knew would never have hired her. Mary is being blackmailed by the slimy Willis Millen, who was a low-level criminal acquaintance of her father. She leaves him in her apartment after angrily telling him she won’t pay him and he can tell Gregory. What she doesn’t know is that one of her younger sister Suzy’s creepy boyfriends, Robert Snell, a teller in her bank, had the backdoor key to her apartment and entered the flat just after she left; he then conked Willis fatally over the head from behind with a statue and attempted to rob Willis of the money roll he was carrying but fled when Mary reentered the apartment. From the street below, eyewitness Mr. Avery and a woman passer-by identified Mary from a silhouette on a shade and became further convinced when in the apartment hearing the dying man say “Mary, why did you … ?”

Mary’s fiancé, Dr. Dwight ‘Brad’ Bradford (Douglas Fowley), who is a research scientist working on an experimental project to bring the dead back to life and doubles as the state executioner (needs the bread to finance his dubious research), is chosen to be the one to pull the switch on the electric chair. In a hard to fathom climax, in a hard to fathom plot line, Brad’s friend Finch gets Snell to confess but can’t locate the governor in time until he reaches him through the radio.

Besides the film telegraphing everything before it occurs and its illogical legal procedures, one wonders how Mary got convicted on such slight evidence, how stupid and unfeeling her sis is, and in how sloppily the narrative is patched together. 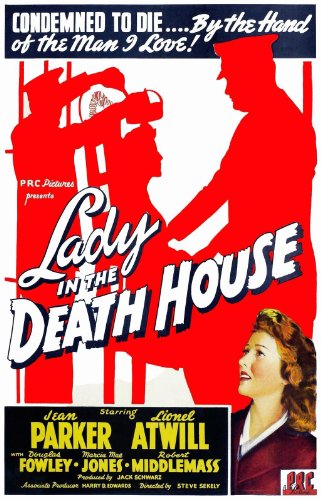