The American-raised Paris-based acclaimed arty cult filmmaker Eugene Green(“Every Night”/”The Portuguese Nun”/”Le Monde Vivant“) concocts a loopy, brainy, tragic romancer that takes us on a numbing tour of the backstages of the classical musical world and the world of philosophy students. It’s set in the artsy-fartsy Paris of 1979 and 1980. All the characters offer formalized otherworldly performances, while stage-talking throughout. The plot follows the affair between the serious, intellectual, extrovert philosophy student Christine (Camille Carraz) and the witty bohemian introverted playful philosophy student Pascal (Adrien Michaux). Their story intersects with the one between a mismatched live-in couple, the tense, fragile, arty classical singer Sarah (Natacha Régnier) and the businessman-like computer scientist Manuel (Alexis Loret). Both couples lack communication, as the artists in each relationship can’t register their thoughts successfully with their success-orientated counterparts who find the higher reaches of the art world inaccessible. In this indie, if you’re not tuned into the higher art world or if you exploit it for career purposes you may be viewed as either a dolt or a corrupter.

Different degrees of tragedy hit the developing true artists. Pascal is denied a master’s by his hypercritical inflated inferior philosophy teacher (Julia Gros de Gasquet), whom he shocks by giving back to her in his thesis presentation the silence she preached in a class lesson was golden beyond words. The curious young man, a seeker, becomes obsessed with the Baroque period (roughly 1600-1750) and the poetry of Michelangelo, considered by some “the father of the Baroque.” When his gf walks out over his chilling bouts of silence, the empty feeling Pascal tries suicide by sticking his head in the oven but even fails at that (the sounds of Sarah’ record give him pause to still live). Meanwhile Sarah is overwhelmed performing for the mean-spirited influential gay predator conductor/impresario Guigui (Denis Podalydès), a monster she has nicknamed the unnameable. When her beautiful singing of the Monteverdi madrigal (sung by Claire Lefilliatre)is insulted by the know-it-all bully pretender, she quits and is so despondent she commits suicide jumping off Le Pont Des Arts. The titled bridge over the Seine is used as a metaphorical bridge between life and death, as it tells its version of the mythic Orpheus and Eurydice story.

The touching story is filled with absurd moments, mucho talk about art (like the comment “that all that is beautiful is beyond us”) and characters looking right into the camera as if they are talking directly to us. It’s a film meant for young idealistic lovers and for those who kvell that it brings up intellectual giants like Martin Heidegger and Jacques Vache without being awkward. 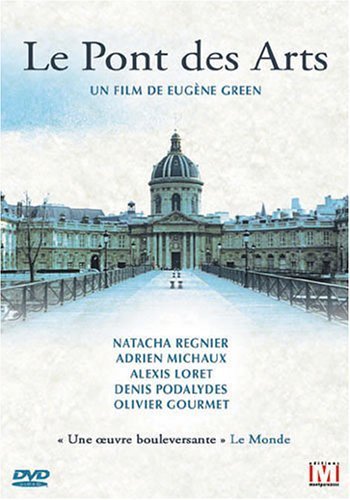