PLUNDER OF THE SUN

Produced by John Wayne’s Batjac company, this escapist thriller has its moments in the sun but fails to be convincing. The plot seems as if it were lifted from in part both John Huston’s The Treasure of Sierra Madre and The Maltese Falcon. It’s about a hunt by unscrupulous fortune hunters for a lost Aztec treasure. It’s adapted by writer Jonathan Latimer from a novel by David Dodge and directed by Mia’s dad John Farrow (“Botany Bay”/”Back from Eternity”). What kept me tuned into the b/w film were the gorgeous exotic location shots of an ancient civilization in Mexico. What kept me tuned out was the lack of suspense, the plodding nature of the treasure hunt and the uninteresting characterizations.

The story is told in flashback as frazzled American tourist Al Colby (Glenn Ford), a rugged insurance investigator from San Francisco, tells Mr. Carter, an employee of the U.S. consulate, his adventurous story that could possibly land him in the clinker. It began one week earlier in Havana, Cuba, when Colby was flat broke and was lured while in a bar by the attractive but untrustworthy Mexican honey Anna Luz (Patricia Medina) to meet wheelchair-bound invalid Thomas Berrien (Francis L. Sullivan), a shady antiquities collector, who offers him a thousand dollars to smuggle a tiny packet into Mexico by boat (and seems to be playing the Sydney Greenstreet role but without the same effect). They agree that Colby’s to meet him at the Hotel San Felipe in Oaxaca, Mexico, to turn over the packet. Berrien and his nurse Anna are also on the same freighter, but the villainous cripple has a suspicious heart attack and succumbs. Colby realizes that this courier job will not be a cake walk when his room is given the once over. Also aboard are the treacherous Jefferson (Sean McClory), a disbarred archaeologist who does a Peter Lorre imitation with a heavy brogue. This shifty character claims to be a coffee broker, but Berrien warns Colby he’s out to steal the mysterious packet–which turns out to be exactly right. There’s also young American heiress Julie Barnes (Diana Lynn), a lush and a tramp (in this film she can pass for one of the better characters), traveling with boyfriend law student Raúl Cornejo (Eduardo Noriega), who is returning home from his studies in the States. The blonde temptress makes it plain she has the hots for Colby; he makes it plain he can’t stand her.

In Oaxaca, Colby unwraps the packet and discovers it contains a three-page parchment, written in a mixture of Spanish and Zapotec, and a carved jade. Colby takes it to a museum curator to translate and is informed that it might be a manuscript dating back some 350 years that the natives hid from the Spanish conquerors and that only Berrien and Navarro (Julio Villarreal) are able to translate. Through some trickery Colby, who seems no better than the other greedy characters, gets Navarro to translate only individual words as he cuts up the copies and makes a master list which only he can put back together. When the parchment is adequately deciphered Colby stealthily visits the site of the 1500 B.C. ruins of Monte Alban, where the treasure is buried (a cache of gold, silver and jade baubles worth in the millions). But the villains go after Colby and he nearly dies fighting them off, and in the end changes his mind about keeping the Zapotecan treasure and turns it over to Mexico’s national museum for a $25,000 reward. He collects as the flashback ends and is ordered to leave Oaxaca immediately. Upon boarding the plane, Anna surprises Colby by sitting next to him and they make plans to return to Cuba to find the remaining nine manuscript pages (thankfully it led to no sequels). The crass materialistic motives of our so-called hero, Colby, made it difficult to give one darn about him (and, for that matter, the movie). 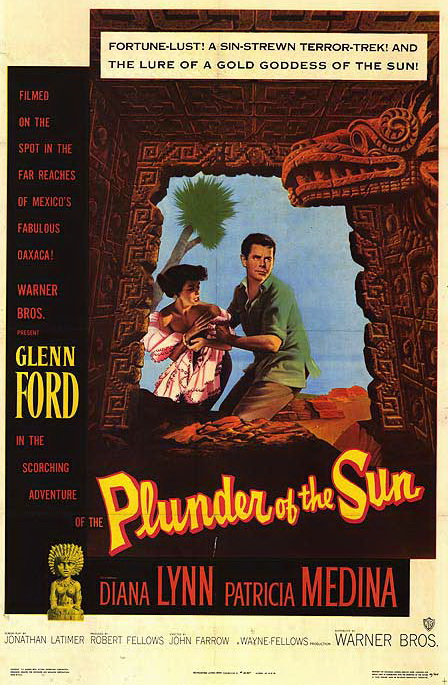