Obviously there is no such a place as Pleasantville, except in a sitcom.. Pleasantville, the movie and the sitcom in the movie, is made into an idealized homogenous (all white) illusionary place, where a brother and sister will be transported into this never-never land of TV fantasy of the 1950s and 1960s. Everyone is repressed and seen in black-and-white sitcom form, reminiscent of shows like Father Knows Best, The Donna Reed Show, and The Adventures of Ozzie & Harriet.

Pleasantville is about how selective one’s memory is when it comes to nostalgia, it is about values that never existed even back in the days of some unreal TV programs; nevertheless, they became falsely instilled into the scheme of family values and are exemplified today as those traditional values.

Pleasantville opens in the ’90s, where a fast lifestyle and family dysfunction seem to be the norm. Teenagers David (Tobey Maguire) and Jennifer (Reese Witherspoon) are the twins of a single-parent (Jane), who is never there for them. At night, with their mom out on a date, David is all set to watch a marathon of his favorite TV program, Pleasantville, of which he is an expert on — knowing every character and minor detail about the show. Meanwhile, Jenn has a heavy date with a hunk she wants to be romantic with while they watch MTV. The twins end up fighting over the remote for the TV show they want to see and it breaks apart, but magically a TV repairman (Don Knotts) who wasn’t even called by them appears at their door and gives them a new magical remote. With the new remote clicked the twins are now trapped inside the TV program Pleasantville, taking the place of the TV siblings Bud and Mary Sue. They are now in a place where people regularly say swell and keen, the weather is always perfect at 72 degrees, there is no such thing as rain, no colors (therefore no discrimination), no sex, no profanity, no fires (firemen only rescue cats), and everything is just peachy. Their new parents are the perfect couple George (William H. Macy) and Betty (Joan Allen), whose idea of marriage revolves around each of them knowing their place–he works and she stays home with the kids.

David and Jenn have a different outlook on life, therefore they have different reactions to being in Pleasantville. He likes living there and was always upset that he couldn’t fit in with the turbulent ’90s lifestyle: he finds it hard to talk to girls his age, in class he is upset to hear about incurable diseases, ozone depletion, and a tough job market. While Jenn is content with the’90s and its free sexual attitudes and is not interested in anything that is not “cool,” like the dull life in Pleasantville.

It’s fairly predictable what will happen to the two of them once they are in Pleasantville. The film satirizes the blandness of such seeming perfection. David has no problem getting right into the TV program, while Jenn calls this place “Nerdsville” and wants out immediately. The calendar permanently reads 1958, but the two are stuck there with their ’90s views on things. At school everything seems more innocent and less tense, dates take place over ice cream sodas and cheese burgers, and being pinned means holding hands not having sex, the basketball team wins every game, and there is nothing really to learn in school that is perplexing because there is nothing outside of Pleasantville. But this changes when Jenn asks questions about what is outside of Pleasantville and takes her boyfriend to lover’s lane for some serious sex. When colors start to appear, things change and will never be the same for these naive folks again.

As expected, the siblings can’t help but disrupt this simplistic community after living in a more sophisticated time period; and, such things as color, emotions, jealousies, sex, conflicts, makeup, and other changes are now brought into this insular community. The filmmaker then analyzes these changes on those newly affected and the result is a more troubled but more interesting people emerging. Through special effects from digital processing, flowers start taking on color and the film begins to have a modern-day “Alice in Wonderland” look to it.

Jeff Daniels plays the stunted soda shop owner (Mr. Johnson) who makes Betty sexually aware of herself and who blossoms when Bud/David gives him art books and he discovers he can paint in colors. The movie makes the point that the revolutionary changes in the ’60s came about when people became dissatisfied with the staidness of the ’50s and began to experiment and expand their horizons. J.T. Walsh is Big Bob, the mayor of the town, in an uninspiring role as the most ardent one against change.

There was something that rubbed me the wrong way about this “cute” idea of a film, besides the fact I was being lectured to about the obvious general ills of society. There are no radical new ideas presented that will make me really think about these issues any differently than the films of the 1950s would have; it is as if the filmmaker is saying that the 1950s didn’t have films that were critical of society: but a list of such films would be very extensive (Marty, High Noon, Ace in the Hole, etc.). My impression is that it really is a 1950s sitcom merging with a 1990s “feel good” type of sitcom, and nothing more. It is basically a gimmicky film, which breaks no new ground, selling an idea about the past that connects it with the present, but doing it at the expense of telling the truth about neither the past nor the present.

The film presumes that through the efforts of these spoiled teens that they will breakthrough the “ignorance is bliss community” and bring about art and literature and a more enlightened attitude toward sex, and to inspire a climate for more responsible social changes. The film is trying to say that the innocence of the 1950s must be merged with the social awareness of the 1990s and this can only be accomplished by the teenage heroes who are not afraid to take chances and change the times they’re in.

I just didn’t buy into the way this superficial premise was presented. By having Jenn/Mary Sue substitute her new ideas of sexual feelings by reading “Lady Chatterley’s Lover” instead of going out with her boyfriend and having sex, seemed a phony response to what literature can offer. Character development is a raising of consciousness that comes about only through an inward awareness, a book can only act as a catalyst for that experience.

What is offered by this story, is just the kind of empty gestures made to genuine problems which can be found on TV programs from both yesterday and today. There was no one in this film who understood how to bridge the past with the future. Instead this becomes a film just like the sitcoms it parodies, which means it’s just another escape film unable or unwilling to delve deeply into all the real problems it brings up. 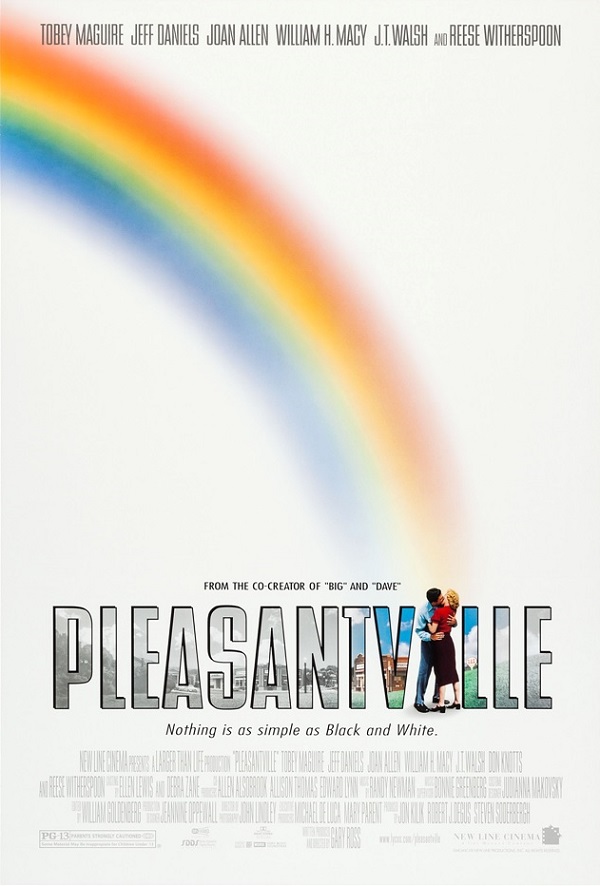