Noted Italian splatter/horror film director Mario Bava (“Blood and Black Lace”/”Black Sabbath”) directs this low-budget sci-fi adventure story that brings the vampire legend to outer space. Bava’s genre blending of sci-fi and horror results in a slow moving alien invasion film that comes with a tedious story, poor characterizations, unrealized drama, zombie-like acting, choppy dialogue and tacky sets. The film is based on the pulp sci-fi story “One Night of 21 Hours” by Renato Pestriniero. The film’s strength lies in the creepy atmosphere it creates, as outer space gets a makeover to look like the misplaced set from a Count Dracula flick.

Two spaceships — the Argos and the Galliot — on the same mission are hovering over a fog covered planet named Aura. They were lured there by strange radio signals, and were curious to see if that was an indication of intelligent life existing on the planet. The Galliot crash-lands and the Argos is forced by a strong pull of gravity to also land. Led by Captain Mark Markary (Barry Sullivan) and his redheaded assistant Sanya (Norma Bengell, Brazilian actress), and with the help of Wess (Angel Aranda), the Argos safely lands and begins their search for the missing Galliot crew. After discovering that the Galliot crew members have killed each other they run into unseen vampire-like creatures causing them similar problems. The 18-man crew becomes embroiled in a battle with this mysterious alien force who are trying to gain mind-control over them. When overcome with belligerence the Argos crew can’t stop themselves from killing each other. Finally there are only three astronauts still alive–Mark, Sanya and Wess. These three discover that the dead miraculously come back to life, though the bodies are the same as the missing astronauts their minds have been taken over by the aliens. The aliens have a different agenda than the astronauts, and it becomes up to these three survivors to save the Earth from an impending alien invasion.

Planet of the Vampires has become a cult favorite, especially noteworthy for the scenes where dead astronauts rise from their graves by tearing themselves out of the clear plastic that covers them like a shroud. The film has a pop-art surreal look, as the set is splashed with filtered garish colors. At the graveyard site for the giant “vampire” skeletons we learn that the aliens are a parasitic ancient race who must get off this planet or else they will become extinct. There only chance of escape is to inherit the bodies of the Argos crew, who are smartly decked out in high collar tight fitting black leather uniforms with lightning bolt insignias on their chests — a uniform that someone deranged might find worth killing for.

The incoherent film could best be summed up by the following dialogue between two astronauts. Astronaut number one: “What’s going on?” Astronaut number two: “I wish I knew.” I would only add that I lost interest in wanting to know more about the supernatural manifestations, and couldn’t wait to return to terra firma again. 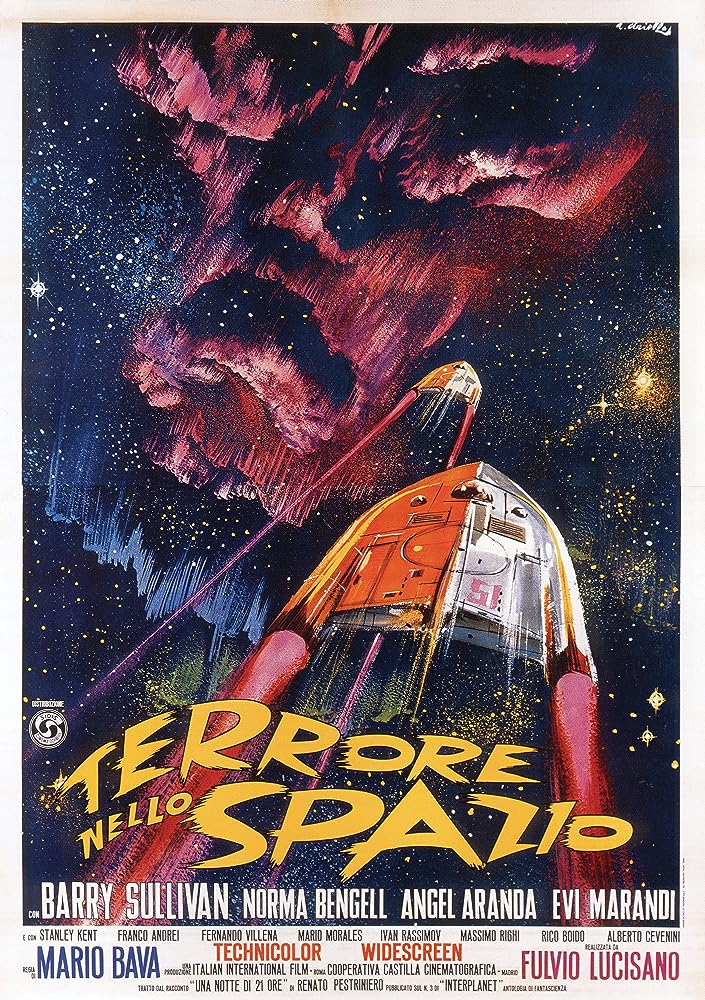