“Manages to plug all leaks and tell an implausible story that still made some sense.”

Director John Walsh (“Ed’s Next Move”), who has co-written this lighthearted romantic comedy with Cynthia Kaplan, plumbs the depths of his main character’s despondency for being looked down by upper-crust chicks because he’s a plumber. This indie film deals in typical sitcom fare with that setup, but manages to plug all leaks and tell an implausible story that still made some sense and never lost its arc.

Though the script takes a ridiculous situation as far it can get until it reaches a dead-end, nevertheless the two stars Martin Donovan and Mary Louise Parker play it straight and their understated movements and good chemistry together kept me interested in their on and off again relationship. There was enough reality about their farcical romance to root for them to get it on together, as they each fight to get recognized for their true worth and not be put down for their station in life. As social commentary for the “me only” generation it provokes thoughts on how the opposite sex views each other through pretenses and all the vanities that go into their romances. Mind you nothing deep is really plumbed, but since I expect so little from this genre I welcomed the fact that this film at least made an attempt to be intelligent and it didn’t dumb the characters down. Though it pushes a bit too hard in the end to hammer home its point about social snootiness. How it handled the making of its movie scenes and all the trivial subplots that emerge from a plumbing scandal to hustling talent agents, is another story. Those scenes were too awkwardly inserted to help the film and took away energy from its more involving romantic tale. The ‘making of a movie’ scenes could only be viewed as backdrop for its farce to nurture, as the insider’s view of the shoot were not very effectively done and seemed blatantly bogus without being humorous.

David Kulovic (Martin Donovan) is a single Manhattan plumber serving the wealthy, who pads the bill whenever he’s treated poorly by his snobbish customers. The articulate, well-mannered, and bright blue-collar worker complains that because of class values he’s regarded as ”invisible” by his upper-class customers. He’s frustrated that even though he’s handsome and good in the sack, he can’t seriously date more desirable women because of his occupation.

When David services the plumbing of his attractive neighbor Toni Edelman’s (Mary-Louise Parker) and in addition services her for a one-night stand, as he departs her boudoir he overhears her gossipy phone conversation saying “he’s sweet but he’s only a plumber.” Visibly upset over this rejection, he leaves without letting her know that he overheard her stinging remarks.

Visiting his best friend RJ Martling (Kevin Carroll), who is an aspiring casting director, David is overwhelmed by all the gorgeous aspiring starlets wanting to be in films and gushing over the director. David sees this as a way to meet chicks, so he makes a proposition with RJ that he will tear up his huge plumbing bill if he lets David pretend to be a director while he pretends to cast for a nonexistent film. RJ reinvents him as “David Coppelberg,” who just returned from Holland. When told he needs a script David remembers that Toni mentioned she just finished one, as she’s bored with her job as an instructional-video writer and is looking for a big break to jump start a new career. David returns to her pad and steals the script entitled Pipe Dream, and the auditions begin. When he realizes he doesn’t know enough to keep this pose up, he returns to her pad to see if she has written more and gets caught in the act. Out of curiosity, Toni decides to go along with the idea and sits in on the casting session. The two form a business relationship with her interested to get her script made into a film so she tells David how to direct, while he goes wild over an untalented and unknown actress Marliss Funt (Rebecca Gayheart) who also happens to work in Toni’s office and he surprisingly casts her over a well-known actress (Hennessy). Word soon gets out that there’s a new talented director on the scene casting for a movie and agents send over their clients. This draws Silicon Valley magnate Mitch (Hopper), who made a bundle in computers, to invest a couple of million in the hip movie business as a change of pace.

When the movie gets shot, David has everyone on the set fawning over him and with this new status easily takes Marliss to the sack. But things don’t go as smoothly as expected and Toni and David start to see that maybe they can like each other for what they are and not for what they desire to be. Toni has the best line in the film, telling David off for being a sleaze by saying “You’re a plumber, I expected more of you.” Despite the flaws, I didn’t expect more and came away content with the film’s overall quality. Supposedly John C. Walsh based Pipe Dream on his own experiences from making his debut film, Ed’s Next Move. 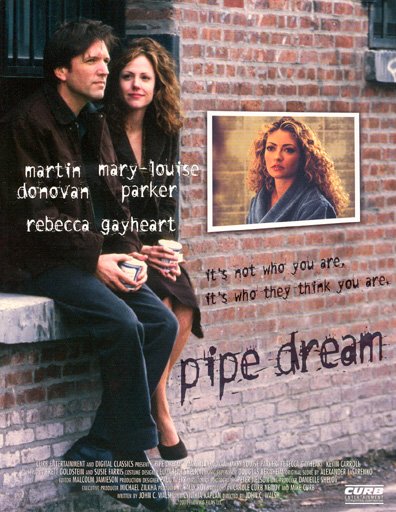