The inane wartime musical comedy flag-waver is shot in stunning Technicolor and works best as a morale booster for the service men. The lighthearted romp is adequately directed by Bruce Humberstone (“Madison Avenue”/”Ten Wanted Men”). It’s based on the story Imagine Us by Libbie Block, and is written by Robert Ellis, Helen Logan, and Earl Baldwin.

The studio exploits Betty Grable, Miss Million Dollar Legs, by cashing in on her popularity with the troops and as a publicity move gives away millions of copies of her famous hubba-hubba swimsuit photo which is included as part of the opening credits. The film title was derived because the GIs pinned the photos over their bunks. Grable plays a fibber stenographer from Missouri, Lorry Jones, who yearns to be a showgirl. With hometown fellow stenographer Kay (Dorothea Kent), also a volunteer hostess at the local USO, she travels by train to Washington, D.C. to work for the government as a stenographer but tells everyone she’s going on a USO show tour.. The train first stops over in NYC for the night, and this gives Lorry the chance to meet the just arriving in town sailor war hero of Guadalcanal, Tommy Dooley (John Harvey), while Kay meets his sailor buddy Dud (Dave Willock). Things go well at a nightclub run by Tommy’s pal Eddie (Joe E. Brown), as she tells Tommy she’s a Broadway musical comedy star. But complications arise when they meet a few days later in the nation’s capitol and she changes her appearance by wearing glasses to tell the sailor she’s a friend of the Broadway star he met in Manhattan. In the end, after a few tepid nightclub songs she sings (such as “I’ll Be Marching to a Love Song”), things work out just dandy, as the sailor forgives her for her deceptions and a true romance should be on the way. A lively Martha Raye plays the real Broadway star, who is Grable’s jealous rival for the sailor.

The escapist fantasy flick did OK at the box office even if the story is a trifle and the acting is stiff. It was filmed in 1943 and Grable, married to band leader Harry James, was several months pregnant at the time of filming. 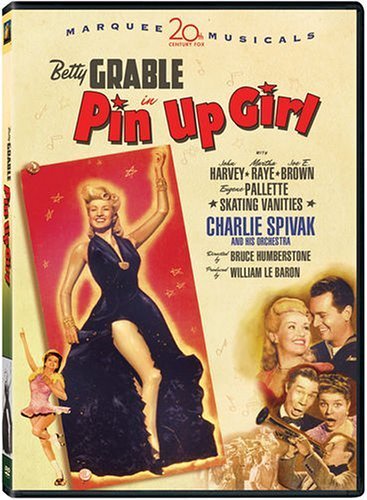