PICKING UP THE PIECES

“It’s a strictly for the pits film, but it did get in a few good body punches on the church.”

A good spoof on the church; but, it is ruined by its vulgarity, excesses and absurdity. The ensemble cast is made up of many stars in cameo roles, but that does not guarantee that the acting is good. This black comedy premiered on Cinemax cable TV after the film’s controversial religious themes prevented it from getting a distribution deal with a U.S. studio.

Tex (Woody Allen) is married to an ex-lap dancer, the beautiful Candy (Stone), but they have to split NYC because the mob’s after her. They move to Texas, where he becomes a kosher butcher. He’s so much in love with her that he would kill for love. When he finds that his wife is unfaithful, he puts a chain saw to her and dismembers her. His wife’s dismembered hand falls out of his truck as he’s on the road to bury her cut off body parts. When a blind woman (Lupe) picks up the hand, with the long middle finger protruding in an obscene gesture, she miraculously regains her sight. The New Mexico town of El Nino learns of this miracle and attributes the hand to being the Virgin’s. Other locals come to pray before it and make requests for miracles: an amputee has his legs restored, a flat-chested girl gets big tits, a midget gets a big dick, a teenager with acne is cured, and so on. The town made up of misfits and a corrupt mayor (Cheech) and a thriving prostitution trade, exploits this miracle and it overnight becomes known as the place with the hottest shrine in the world. The tourists flock here in droves and everyone in this once poor town is thriving.

The local padre, Father Leo Jerome (Schwimmer), is having a torrid affair with the hottest prostitute in town, Desi (Cucinotta). He has lost belief in his religion and doesn’t know how to stop this miracle farce from continuing, especially when the church sends its miracle investigators (Gould, Drescher, and Dick) there and they confirm that it must be the hand of a saint. It is their belief, that they should not ruin a good thing that the church has going for it. Besides the priest, the mayor also knows the hand is that of a murdered woman; but, he doesn’t want to spoil the town’s financial boon.

It all comes to a head (no pun intended), when Sheriff Bobo (Kiefer Sutherland) from Texas comes to arrest Tex for killing his wife. He’s upset that the butcher killed the best lay that he ever had. The film is a series of sight gags, nasty one-liners, pronouncements against the church, and awkward comic scenes. Most of it is inane, but one of its good moments is when it is said: a good reason for keeping the hand as a miracle, is that it gives people a religious belief in the hereafter and because of that they would be nicer to each other.

It is directed with reckless abandon by Alfonso Arau (Like Water for Chocolate/A Walk in the Clouds), with a disarming heavy-handedness and lack of subtlety (it ends by this in-your-face statement: God is sending a message — if you can’t take a joke, go f*ck yourself). It’s a strictly for the pits film, but it did get in a few good body punches on the church. The one I liked best is: “If Jesus wasn’t killed, you wouldn’t have a religion.” His death is, supposedly, a good argument to keep capital punishment. 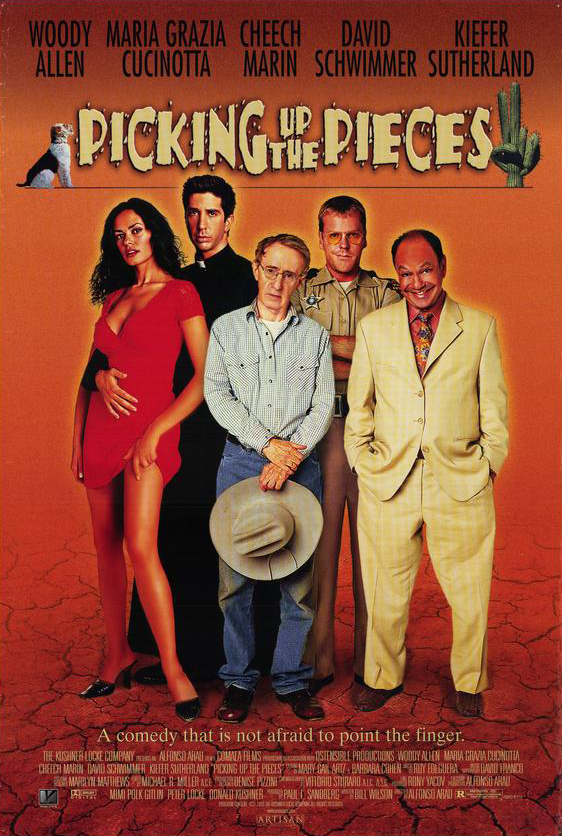