GREATEST SHOW ON EARTH, THE

Cecil B. DeMille (“The Ten Commandments”/”Samson and Delilah”/”The King of Kings”) tells a big brash soap opera story using the Ringling Brothers and Barnum & Bailey Circus as its background. The crass story line gives way in importance to all the activity around the big top, featuring many real live circus performers including The Flying Artonys, Lilo Juston, The Zoppes, Emmett Kelly and The Flying Comets. This middling circus backstage drama won best-picture Oscar for 1952, snaring DeMille’s only Oscar that wasn’t an honorary one. If not the worst film ever to win the Best Picture Oscar, it’s up there as one of the most undeserving winners.

Serious business-like circus manager, who chooses career over women and even says “Women are poison,” Braden (Charlton Heston), talks circus owner John Ringling North and his board of directors to run the circus through small towns and for the full season rather than scaling back to ten weeks and playing only in big cities, that is if they stay in the black. Braden has inked the popular flamboyant star performing European aerialist The Great Sebastian (Cornel Wilde) to headline the show and bring the crowds in as he takes over center ring, which the board reluctantly agrees to go along with as Braden acts as if he were Moses and his leadership was not to be denied. Fellow aerialist Holly (Betty Hutton), Braden’s love interest, is glad the show will run for the season, but the ambitious artist is disappointed that trouble-making egotistical womanizer Sebastian takes her place in the center ring.

The circus travels cross-country and in between the many circus acts, the romantic rivalry story builds around Braden, Sebastian and Holly. Jimmy Stewart plays a kind-hearted mysterious circus clown named Buttons who is never seen without his make-up, and though enormously popular making the kiddies laugh he’s crying inside because he turns out to be an on-the-lam medico mercy killer of his wife. There are also a series of contrived incidents to manufacture suspense (such as Sebastian hospitalized after a fall resulting in a mangled hand and the shady doings of gangster Henderson trying to muscle into the circus take) and finally a spectacular show-stopping train crash to add to the film’s coarse elephantine spectacle.

It ultimately plays as DeMille’s homage to the circus; a fun loving empty sawdust epic with baby gorillas, clowns and elephants on display to amuse the popcorn eating crowd.

Bob Hope & Bing Crosby have a cameo as spectators. Dorothy Lamour is a circus performer who was Sebastian’s ex-girlfriend and is frustrated by his rejection now. The sarcastic Gloria Grahame is the elephant girl who eventually finds true romance with the humbled Sebastian after a tough romance with Lyle Bettger, the German elephant tamer, who turns bad and gets his comeuppance in the train wreck. A miscast Hutton, in a leading role she doesn’t deserve, ends up snaring circus prize Heston. 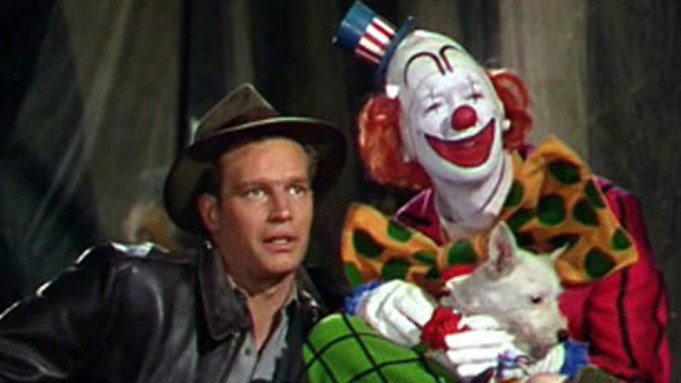 I COVER THE WATERFRONT