PIANO TUNER OF EARTHQUAKES, THE

“The narrative fails to be as colorful as the title.”

I saw a lot of pretense in this arthouse film, but I never saw anything I could relate to without feeling like I’ve been had. The film’s hidden meaning seems to be reserved for those channeling the inner workings of the American-born London-residing twin Quay Brothers and their strange thought process. It’s the second feature directed by the talented Brothers. The creative animators blend together live action with puppet animation and again collaborate on the script with Alan Passes, as they did ten years ago on “Institute Benjamenta.”

What we have here is an obscure and weird fable about automatons, opera singers and ruptured desires. It’s the kind of fanciful pic (though the plot is conventional) that should appeal to those with an appetite for dreamy amber-lit visuals and those demanding originality above all else. It’s the perfect example of a film with style over substance, because as seductive as the visuals are the dialogue is, nevertheless, trite, the actors are for the most part stiff (the exception being opera star Malvina van Stille’s engaging performance) and the languid story never awakens from its slumber.

It’s set in the 18th century, in an imaginary hermetic world, where English is spoken but the characters also answer to a variety of European sounding names. The plot line involves the beautiful opera singer Malvina van Stille (Amira Casar) who is set to marry the dashing musician Adolfo (Cesar Sarachu). But she’s murdered and then abducted during a performance by the sinister madman inventor Dr. Emmanuel Droz (Gottfriend John), who takes her to his remote tropical island and somehow revives her as an amnesiac with the idea that she’s to be the star of a “diabolical opera” he created. It seems our crazy inventor feels rejected that the uppity opera world turned down his compositions and sees this as a way to show them they were wrong.

At the mountain-top villa, the innocent titular piano tuner Felisberto (also played by Cesar Sarachu), is hired to adjust Droz’s bizarre seven machine automata (resembling human body parts). Also around the house is a fetishistic housekeeper (Assumpta Serna), who tries to vamp the piano tuner and tunes him in that the villa might indeed be a loony bin and the dancing gardeners might be the patients.

The fairy-tale story merely acts as an excuse for the Quays to show off their stupendous animated tableaux. Despite the sheer pleasure of taking in the splendid imagery–the narrative fails to be as colorful as the title, and the tedium of the film outweighs whatever pleasures were derived by all the weirdness and lush beauty of the production. 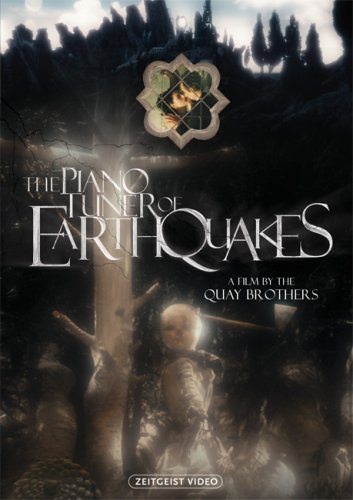