“The film only has life when the Joker is onscreen and that’s for only half the film.”

Another of the DC Universe Original Animated Movies, except this one is a dubious production rather than one the franchise’s usual good versions. It’s helmed for adults by Sam Liu (“Batman: Year One”/”Justice League vs. Teen Titans“), while Alan Moore writes the story and the artist Brian Bolland supplies the graphics. The animation has a downbeat Batman (Kevin Conroy) battle the arch villain, his nemesis, the Joker (Mark Hamill), who taunts the superhero with his latest malevolent scheme to drive him insane. It’s based on the 1988 comic book that has been received by Batman experts as the definitive graphic on the Joker. The film should have been a winner but unfortunately things get messed up with a bad prologue and it never recovers from that bad taste. The comic book will more likely prove a more rewarding experience.

There’s the tawdry thirty minute prologue (all new material for the film) telling us that Barbara (Tara Strong), the librarian daughter of Batman’s pal Commissioner Jim Gordon (Ray Wise), becomes Batgirl and dates Batman, but after sex the relationship breaks off because the overbearing Batman doesn’t think she’s a good crime fighter and bounces her as his crime fighter sidekick. We then follow The Joker (Mark Hamill) escaping from the nuthouse with Batman in pursuit. The Joker relates how he was a regular guy who quit his lousy job in a chemical plant to become a failing stand-up comedian, and when in need of money to support his pregnant wife (Anna Vocino) was recruited by the mob to work a heist of a plant next to his former workplace. The robbery is botched and the Joker becomes a violent lunatic clown after falling into a chemical vat. After his prison escape, the Joker turns up at Commissioner Gordon’s (Ray Wise) apartment and shoots his daughter Barbara in the stomach, which hospitalizes her, and he snatches the Commissioner to be caged in an exhibit in his new fairgrounds funhouse. It ends with Batman trying to rehabilitate the Joker. But the Joker responds with a killing joke: telling of two insane men who escape from an asylum. One jumps off the roof ledge to safety while the other refuses to jump fearing he will fall to the ground in the space between jumps. The jumper tells him not to worry, he will shine a flashlight and he can walk safely over the light-beams. But the reluctant jumper tells him I’m not crazy, I know when I get half-way across you will shut off the flashlight and I’ll fall.

Though Mark Hamill, the voice of the Joker, is terrific, the film is not. It spends too much time on Batgirl’s story and what went wrong with her relationship with Batman. The film only has life when the Joker is onscreen and that’s for only half the film. 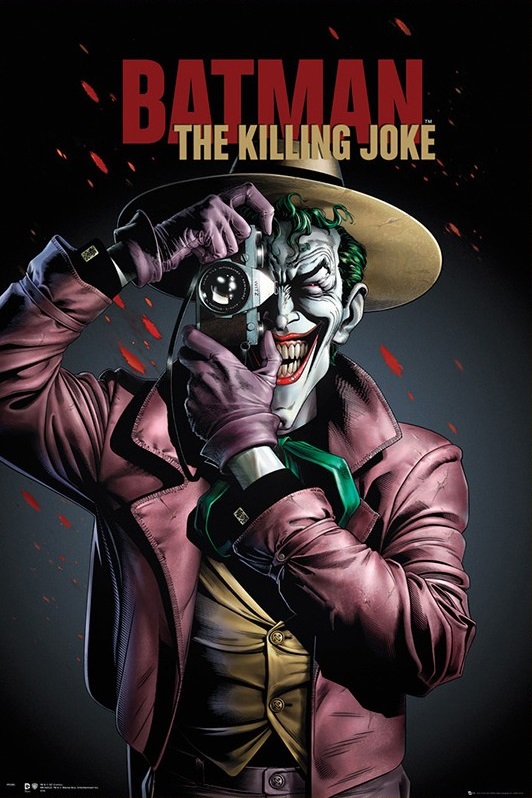