“This is a very intelligent and effective film, that raises many interesting ideas and questions about the supernatural.“

After one day of marriage, in 1912, a photographer, Charles Castle (Toby), goes with his wife to the Swiss Alps and is stunned to see her fall through a crack made in the snow, where he is unable to pull her up to safety even though he had her by the hand. He soon retreats to a world of rational skepticism, unable to accept his loss and face the reality of the event — he thereby throws himself fully into his photography. During WW1 he photographs the causalities from within the trenches, unconcerned about any physical dangers to himself; after the war he goes into partnership with Roy (Davis), as they open a lucrative portrait photography studio specializing in trick photos for the parents whose sons died in the war.

Still restless and searching for answers about why his true love was taken from him and if he can make contact with her in the afterworld, Charles attends the meetings of the Theosophy Society in London. At one of the meetings, he gleefully exposes a charlatan photo of angels photographed with a child. Here he meets the writer of Sherlock Holmes, Sir Arthur Conan Doyle (Hardwicke), who has taken the view that people must be left with some hope that they can encounter their loved ones in the other world. But, he also states, that they must not be tricked by their emotions into believing in something that is not scientifically possible.

The film does a marvelous job of giving us a feel about life in the early part of the 20th century and how resolute some genuine seekers of the truth were in carrying on the arguments of religious orthodoxy versus scientific reality.

Things change radically for the bereaved husband, who has all-but-given up hope of meeting his wife again in the afterworld, when he is given a photograph by the earnest Mrs. Beatrice Templeton (Barber) of her two children in the presence of fairies; she is someone he met at the Theosophy Club meeting.

Since Charles can’t find anything phony about these photos, he is pressed into believing that maybe it is possible to prove that there is a spiritual world with such creatures in attendance. What convinces him of that possibility is that the image of the fairy is reflected in the little girl’s eyes, something that was impossible to alter.

Charles is all businesslike, there is not an ounce of humor in his bones. He travels to the Templeton’s country home to do further studies on the subject and to see if he can see the fairies for himself. One of the obstacles in his way is the Reverend Templeton, Beatrice’s stern and jealous husband. His tendency is to believe that faith is what we must live by: “I don’t need proof, faith is enough for me.” This kind of faith is what Charles says he is hiding behind; that he closes his mind to new ideas and acts negatively about anything that isn’t in the scriptures.

One of the problems with the film, that took away some of its luster, was that Charles acted in such a one-dimensional manner, jumping from non-believer to a firm believer in fairies in such a rapid time. Therefore his story did not have the impact it could have had with a more drawn out response and introspective performance. He was not someone that we could warm up to in an instant without knowing more about him than his tragic loss. He seemed to be too brusque with others, not capable of loving anyone else but his deceased wife, which makes him out to be someone we cannot really empathize with for long. This is highlighted when Ben Kingsley is contrasted with him. Now Kingsley’s role is really structured to fit a rigid character who can’t change yet his presence onscreen is dynamic, bringing much more to his villainous role than just that one-dimension to it. He is able to project his view of life to us by a raised eyebrow, a knowing gaze into the eyes of his enemy, or by preaching to the converted in a way that reassures them that he is there for them. We might not like him but we have a better understanding of him than we do of Charles. His ominous presence makes us believe that his apparent rationality, tinged with his keen social awareness, is difficult to fight against. We wanted to like Charles much more than we were given a chance to and we couldn’t, mainly because we could never get close enough to him. But that is not to say his performance wasn’t good. It was well-suited according to character, but it was not a stirring performance and not one that completely captured our imagination.

What results is a film that is beautifully photographed and stimulating to the intellect and freshly innovative. And, for how many films can you say all that is true?

Charles has discovered from the children and their mother that by eating certain daisies he will hallucinate and be able to see the fairies. Mrs. Templeton after ingesting the hallucinogenic daisy, climbs a tree and falls and goes into shock and dies. Here the story goes off into two directions: the conventional one, where the reverend does not trust the young photographer and forces him to tell about his relationship with his wife and children; and the not so conventional one, where a trip into the inner world to see the fairies is drug induced, indicating that is the only way to see them. We are led to believe that religion doesn’t work because it is too fearful to go inward; that theosophy doesn’t work because it is not a real experience for those partaking in their seances and pseudo-scientific experiments; and, that science doesn’t work because its knowledge is limited.

Linda (Woof), the nanny to the children, falls in love with the intractable convert to the world of fairies. He’s a believer in the physical world as created by an unknowable God, but who does not believe in a personal God. But the love story remains secondary to the ideas presented about the afterworld; her romantic interest in him just never becomes vital to the story.

Where the story is strongest and most convincing, is when it tries to debunk both the belief and disbelief in fairies. Hardwicke is an effective Doyle, as he says there are such creatures as fairies: they are the hand-maidens of nature, angels expelled from heaven. Their physical reality is only to be found in the next world. Charles’s knowledge is not from direct experience, but from books. Therefore, when Charles sees the fairies himself, he becomes a fanatic, believing only in what he sees from within. This proves dangerous to him, because Charles has now challenged both the vicar’s and the scientist’s notions of the world and is left alone to defend himself in a world that one can only see for themselves. There is no rational argument he can present to edify what he knows for certain.

That Charles becomes a Jesus figure, refusing to defend himself after accidentally killing the vicar and is hanged for that crime, might further indicate the high price one has to pay for gaining such truths about the inner world.

This is a very intelligent and effective film, that raises many interesting ideas and questions about the supernatural. It is a serious film about a topic that has been virtually taboo in our culture ever since the ’60s Drug Revolution imploded on the landscape and caused a generational war. But it is now the end of the century, and the questions alluding to a spiritual world and the use of psychedelics as one way to get there are more relevant than ever.

Those who consider themselves to be seekers of the truth, unafraid of trying new methods to reach the truth, should find this film intriguing. If there are quibbles with this imperfect film, they are not that significant when you consider how well it made its case about an afterworld. Here death is considered as a change of state and the soul as an altered state of the true self. This is something Western mystics might find easier to believe than others; but, in any case, one seeking the truth still must choose which spiritual conditions to aspire to, and this film presents one such option. The real world that Charles witnessed, where his love was taken away from him and his generation died needlessly in the bloody fields of WW1, made him yearn ever more for an afterworld. Charles simply wanted a place where he could make contact with his loved one. That this mysterious story was so captivating, showing how necessary it was for Charles to find his place there and how believable his quest was, speaks highly of how well-crafted a film this was. 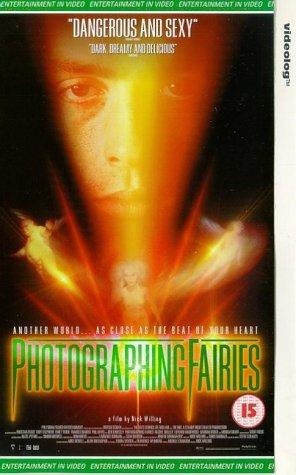