“A gem, the best Civil War film I ever saw.“

Robby Henson (“The Badge”/”House”/”Trouble Behind“)writes and directs this understated powerful drama on the Civil War that effectively points out the devastating effects of the bloody war on both soldiers and civilians. It’s set by a misty creek in the isolated Cumberland Mountains of Kentucky, in 1862, near the town of Meshack Creek, where loyalties are divided between the South and the North.

A noble widowed Ohio farmer, Union Army Captain John Hull Abston (Chris Cooper),leads his rag-tag cavalry five-men patrol to the remote farm of Sarah Anders (Patricia Clarkson) and her 11-year-old son Johnny (Will Lucas) on a raiding mission to grab the enemy’s livestock to feed the troops back at the base. Sarah’s husband is fighting for the Confederates in Tennessee and her daughter was recently slain by Yankees, leaving her sullen and world-weary and hostile toward the Yanks. Sarah and the boy barely survive on their dwindling food supply, and are irate that the Union soldiers want their remaining livestock and useful plow mule.

When Newt (Huckleberry Fox), one of the Union soldiers, accidentally falls on a pitchfork while foraging the barn, the captain decides to remain at the farm until Newt can travel. While there for a few days, the Captain is attracted to Sarah and the two begin an awkward and unwilling friendship, as she reminds him of his serene hardworking life on the farm when married and she in turn displays a maternal feeling for him and the wounded soldier. The Captain treats her politely, cuts her wood and plows the proud southerner’s corn fields. The enemies are able to relate to each other with civility as both have suffered greatly during the war, and almost put their differences behind them.

But things rapidly change when Rodie (Richard Tyson), a soldier with a nasty disposition, roughs up Sarah because her dog ate his meal and blasts the captain for acting so kind only because he wants to get in her pants. This incident brings back Sarah’s hatred for the Yankees and she sends her son secretly out at night to tell her rebel sympathizing neighbor Preacher (Kris Kristofferson) of the presence of Yanks on her farm. Preacher reacts by telling the boy the Exodus story of when the Pharoah’s army was sent into the desert to hunt down the Israelites and drowned in the Red Sea. Nevertheless the Preacher sends his young son out to Sarah’s farm as a sniper.

The well-acted and visually pleasing pic was never released in theaters by the defunct Orion studio and even after its Lionsgate DVD release it has slipped under the cracks as a rarely seen film that deserves to be noticed by a wider audience. This film is a gem, the best Civil War film I ever saw (it makes GWTW in comparison look like a glossy soap opera, that doesn’t reflect how life was on the farm for most southerners).

The Pharaoh’s Army is based on a true tale that has been passed on orally through the generations by those who live near the borders with Tennesseee and Ohio. The film is narrated by the boy, who survived to become an old man (Robert E. Simpson). 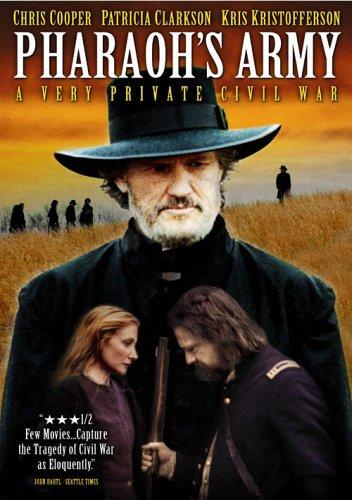