Perfumed Nightmare won the International Critics Award at the Berlin Film Festival and a Blue Ribbon at the American Film Festival in 1978. This is a brilliantly arranged original fable by first-time filmmaker Kidlat Tahimik, who was born in 1942 in the Philippines during the Occupation. It’s an imaginative semi-autobiographical tale about the three stages of his life (childhood, reaching manhood, and as an adult) leading to his awakening to and reaction against American cultural colonialism. The film is grounded in a subtle humor that catches the absurdity of the human condition through the eyes of a resourceful and cheerful man. The Perfumed Nightmare is so refreshingly innocent in its wide-eyed approach to the wonders of the Western world and is so different from any film I have ever seen, that it left me in a euphoric mood. Amazingly it was made for a mere $10,000 and was shot on Super 8.

It plays out as a docudrama, as Kidlat stars and also provides a voice-over in English throughout. He tells of feeling trapped living 33 years under the American occupation in the Philippines, or as he says “the next 33 typhoon seasons in a cocoon of American dreams.” This, then, is his perfumed nightmare: that progress and technological advancement is the best hope for his country and the world. In his primitive village of 600, some distance from Manila, he worships the Machine, thrills at the efficiency of industrialism, and believes the rocket will prove to be the ultimate invention of his lifetime. The Filipino born Kidlat was raised in a country whose culture has been saturated in his mind with things American, and revels in the superiority of the Americans because of their technological achievements–which gives him an inferiority complex. He’s pictured as an ambitious young man from the time he took tiny baby steps to cross “the bridge of life”–to his village, to being circumcised, to traveling by plane to Europe. He spends his entire life in an effort to find the bridges to his cultural identity. This dream and obsession with bridges as the true marks of progress, provides the text for a lyrical and thought provoking film that will lead Kidmat in unusual directions.

It opens with Kidmat as a young boy taking his toy car across the bridge that provides the only access to his village. The adult Kidmat provides the voice-over throughout telling about the bridge’s history: it was built by his grandfather; destroyed and replaced by the Spanish; then the Japanese rebuilt it. And, finally, the Americans. He tells us that it is so narrow, but can’t be widened for two-way traffic due to the forces of the wind blowing in from the surrounding mountain even though the American engineers tried.

Kidmat tells us that he’s the founder and president of his village’s Werner von Braun fan club, and that he listens regularly to the Voice of America and sent a letter to them requesting an autographed picture of the ex-Nazi scientist. We learn his best friend is Kaya, a man with tattoos all over his body and arms, who builds huts the old-fashioned way out of bamboo that withstands the typhoons.

Kidlat is a jitney driver which means he drives “jeepneys,” the ornately recrafted and decorated hand-made vehicles that have their origins in the Jeeps left by the Allies in World War II.

Kidmat’s dream is to strike it rich in America and buy an electric traffic light for the bamboo bridge.

Kidmat dreams of Cape Canaveral, and longs to be in America where he could be an astronaut. He takes pleasure in glorifying to the children members of the von Braun fan club the Apollo moon shot and space travel, and reads them a letter sent by the Voice of America about the first words of the astronaut who landed on the moon that echoes his sentiments “That’s one small step for man, one giant leap for mankind.”

A tall, cocky, arrogant American entrepreneur (Lerch) with a raspy voice is in the Philippines for an international conference that is aborted, and winds up taking Kidmat to Paris to work for him loading street bubble-gum machines. The gentle, wispy-bearded, slender, wistfully brown-eyed Filipino is inspired by the double-yolk eggs sold by the warm-hearted Parisian street vendor named Lola, an old lady who dreads progress as she will soon be displaced by the nearby ‘supermarket’ (the enormous Centre Georges Pompidou). On a week’s vacation Kidmat treks to Munich, the birthplace of his hero von Braun, but he has started to no longer believe that the rocket is the answer to everything wonderful or that progress is the sole answer to the world’s problems, or that something super is necessarily better or more beautiful or what is really needed. This causes him to resign his presidency and membership in his village’s Werner von Braun fan club, and awaken from his false dreamworld. He now realizes that his primitive imperfect village is locked into superstitious annual self-flagellation ritual ceremonies to the Virgin Mary, reminding him of a past he can’t return to. But that the Western world in all its progress and globalization is also not perfect, as it causes tremendous economic hardships to its good citizens and sacrifices traditional values for lesser ones. The last image is of him in Paris with documentary footage used in the background shots, as he is telling us he must find his own way in the world. We leave him deciding whether he will stay in Paris or go to America with his boss or end up moving in an entirely different direction. 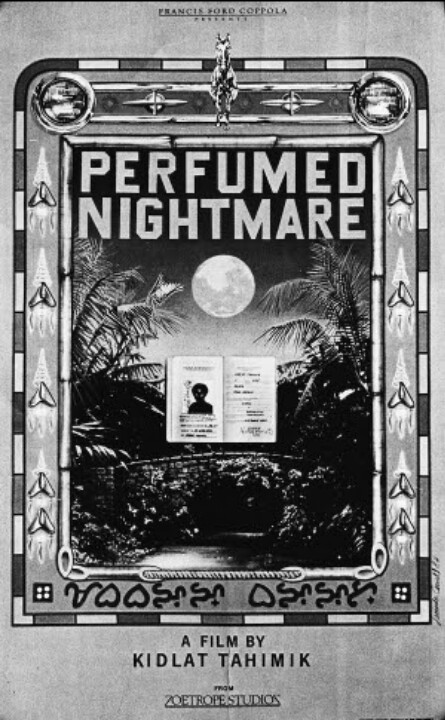