“Though everything might be literate and smart, it never took off and always seemed static.”

A pushy arthouse film that tries hard to push a hypothetical question forward as to what would have been if Hitler succeeded as an artist and thereby abstained from politics. It’s an interesting question, even if the answer can only be assumed. Dutch-born director Menno Meyjes, a noted screenwriter of such films as “The Color Purple“, directs the first film he has written which centers on Adolf Hitler’s post-WWI years as a 30-year-old struggling artist in the Munich of 1918. Corporal Hitler is back home from the war as a medal winner of the Iron Cross for fighting in the frontline trenches during the crushing German defeat at the Battle of Ypres– the turning point of the war. But returns home to find he has nothing. There’s no girlfriend, family, friends, career, money, or home (he lived in the army barracks at the time of the Versailles Treaty). He’s armed only with his conviction that he’s a great artist and that he’s owed something for his war experience. Hitler is made human, albeit, as a rather despicable and hateful and humorless miscreant, but still a member of the human race with personal yearnings. Meyjes explains how the Führer, an everyman German type, a nobody, used his limited talent in the arts to propel himself into becoming a first-class rabble-rouser and a propagandist under the tutelage of a passionately hateful anti-Semitic Captain Mayr (Ulrich Thomsen). He’s shown not as the Antichrist many would like to believe is the real him, but as a pathetic nerd and sickly rigid little man who was influenced by the times and found strength in his hateful self to strike the right chord with the German people who needed a scapegoat for their dire economic situation and emotional support for their poor self-concept. He connected with the German people by blaming the Jews for everthing that’s wrong in Germany, as he was also propping the German people up with his Aryan superman philosophy he articulated in emotional street speeches.

The film felt all of these things: innovative, humorous, smug, limited in scope, and stuck on its fictional account of the future madman. There are also a series of art lectures delivered through the course of the film that were preachy–not blending into the rhythm of the story–even though they were thought-provoking.

Max is a fictionalized portrait of a pre-political Hitler’s love-hate relationship with one-armed Jewish art dealer Max Rothman (John Cusack). In fact, Max is a fictional composite of those Hitler may have met during this time frame. Max got his wound in the war which prevented him from pursuing an art career, but he returns to his wealthy bourgeois family of his medical doctor father (David Horovitch) and his lovable stereotyped clutching Jewish mother (Janet Suzman), and his lovely wife Nina (Molly Parker) and two lovely children, and opens a successful art gallery selling at high prices the newest rage in abstract art– Max Ernst, Monet, and George Grosz paintings. He also has an attractive German mistress Liselore Von Peltz (Leelee Sobieski), which makes Hitler furious at how the German women are made into tramps.

Max meets the sickly and desperate Hitler (Noah Taylor) at his warehouse art gallery. Hitler, as a messenger, delivers him paintings. The snippy and unlikable Hitler brings along his art portfolio for Max to look at and talks disdainfully of the abstract artists ruining the world with their debauchery. For Hitler art is a matter of eternal values whereby each generation improves the last generation and art expresses the nobility in man. The chain-smoking Max calls for an art that is not limited by subject matter, but an art that reveals the depth of the artist and offers that magical connection that raises the viewer’s greater instincts. The story builds in tension showing the futile relationship between the Jewish art dealer and the Nazi. It finally dissolves as violence rears its ugly head, with Hitler finding his art in politics and power–which he calls the new art.

Though everything might be literate and smart, it never took off and always seemed static. As a lecture on art and a dissertation on a monster created by society, it was finely researched. But as a kinetic film experience it lacked passion and drama. In its weakest moments it seems as if John Cusack is not an actor playing Max but is really the successful and dapper Hollywood actor John Cusack himself who meets a very good actor, Noah Taylor, playing the author of Mein Kampf and the creator of the Holocaust. Cusack comes away disappointed that he couldn’t make an artist out of the hopeless soul he tried to mentor and befriend, even as he ranted on against the Jews. “Max” was just loaded with the possibilities of ‘what if’ things went in a different way. Obviously, they didn’t … so even this interesting premise couldn’t alone save the film. 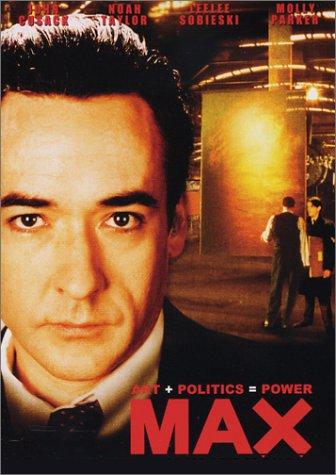