“The way it was conventionally shot curtailed the emotional responses it needed to evoke.”

Clark Johnson (“Juanita”/”The Sentinel”) directs this court battle film, whereby a stubborn, elderly, independent-minded Canadian small farmer, Percy Schmeiser (Christopher Walken), tangles in a law suit with farm supply giant Monsanto over its product dictates. The script by Garfield Lindsay Miller and Hilary Pryor bases it on a real-life 1998 Canadian legal battle, that went all the way up to the Supreme Court.

The inspirational drama is dry and dull, and though told in a heavy-handed conventional drama way, Walken’s subdued performance has some magic in it. He brings his underdog Saskatchewan farmer karma to the screen as a hero of the people, the silent majority, who after a bullying lawsuit from the agrochemical conglomerate claiming patent infringement on its seeds (he was fined $19,000 by Monsanto for using its proprietary technology–Roundup Ready seeds, which were blown onto his land from nearby fields and was ordered to surrender his entire contaminated seed supply to the company). He refuses to pay the fine and fights back even when told by just about everyone he has no chance of winning, even if what they claim is absurd.

Helped by a young and inexperienced lawyer, the cane using Jackson Weaver (Zach Braff), and a crusading environmental activist Rebecca Salcau (Christina Ricci), the soft-spoken farmer won’t back down to the giant corporation and their team of smug lawyers, led by the unlikable Rick Aarons (Martin Donovan).

The way it was conventionally shot curtailed the emotional responses it needed to evoke. Nevertheless it was on the right side of the battle, cheering on the sympathetic underdog over the monstrous giant.

Monsanto had a bad rep, and was recently taken over by Bayer. 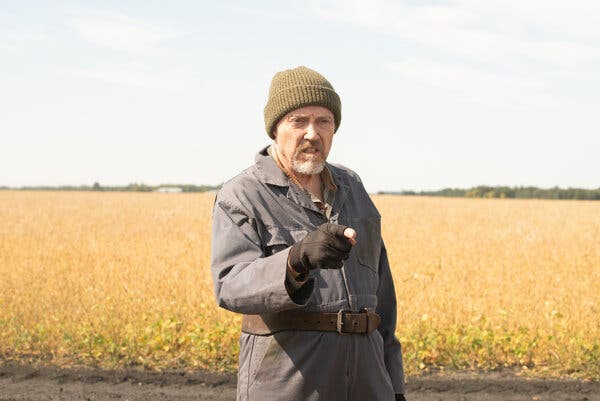 LOVE ON THE RUN