“A most interesting and perceptive film.”

In his first movie after his serious motor scooter accident in 1995, Takeshi Kitano (Boiling Point/Sonatine) has made a film about two troubled teenagers that he has great affection for even though they are considered to be morons and failures in their rural high school by the teaching staff and the other kids. Their teachers think they will only end up being petty criminals. Masaru (Ken Kaneko) and Shinji (Masanobu Ando) are close school friends who go truant together, play practical jokes on their classmates and teachers, set a teacher’s car on fire, ride their bikes noisily around the playground while class is in session, bully the other students, shake them down for protection money and mug them for loose change. These two seem destined for a wasted life, as they are shown in contrast to the other students in their class who are at least trying to prepare themselves for a career.

Two other students are shown who hope to make it: one as a stand-up comedian; while the other is a very delicate boy who gets a job with a sales firm but yearns for more freedom and more money, so he becomes a taxi driver. He will become disillusioned with that job also.

The two delinquents spend their schooldays hanging around a teahouse and drinking beer at a noodle restaurant, using the money they collected from their classmates to pay the tab. A group of the victims are fed up with this and pool their money together to hire a young boxer thug to take care of the bullies. Masaru is the bigger and more aggressive of the two and attempts to stand up to the boxer, but gets knocked down repeatedly. This prompts Masaru to join a boxing club with his shy friend, as he is willing to train and learn how to box to get even. In the noodle restaurant, they meet a yakuza gang and befriend the leader and get in good with him, though the leader’s flunkies hate these two kids. The kids are impressed with how cool the yakuza boss is and treat him with the utmost respect.

In the gym, the surprise comes when Shinji gets into a sparring fight with his friend and thoroughly beats him. The two decide to follow different paths, as Shinji hopes to become a pro boxing champ while Masaru quits the boxing club in humiliation and joins the local yakuza gang. He hopes to become a yakuza boss.

Just when you think both of them will rise to the top in their chosen fields, as they both have the needed skills to make it — they both goof up and fail to succeed. Kitano has strong feelings for them as they probably reminded him of his own unsteady youth he, nevertheless, doesn’t let them off the hook. He shows why their many faults and blemishes and their immaturity and lack of discipline, makes it impossible for them to succeed. But he ends the film on a vague note, showing that the kids return together from their adversity and strive to begin anew, realizing that nothing has changed for them. Kitano is only an observer of their behavior and offers no opinion on what motivates them to be the way they are.

This is one of the better boxing/troubled teenager movies I have seen, very much in the style of those old Warner Brothers Bogie films. There is a freshness and a spark in it that is very moving. These were characters placed in situations where they are still so young, that their current downfall does not necessarily mean curtains for them.

Kitano continues to make offbeat films that are packed with a wallop. He must be considered by now as one of the better auteurs operating today. This film has his same intense rhythms and visuals as his other great gangster films, but it is less violently graphic. The director is so confidant of what he is doing that the character of Shinji shines ever so strongly, despite long periods of him remaining quiet.

Kitano’s unique gift is in his understanding of the troubled youths and in his humorous presentation of them, one that is given with a gently bemused but forgiving look at how the teens do such stupid things as kids. But he also shows how serious the consequences of screwing up their youth can be. For him, this screwing up means not knowing in what direction they should be heading, and by failing to be self-disciplined. He also manages to show that the serious students attending class didn’t seem to be faring any better, as they are also trying somehow to find themselves in the straight path they have chosen. A most interesting and perceptive film. 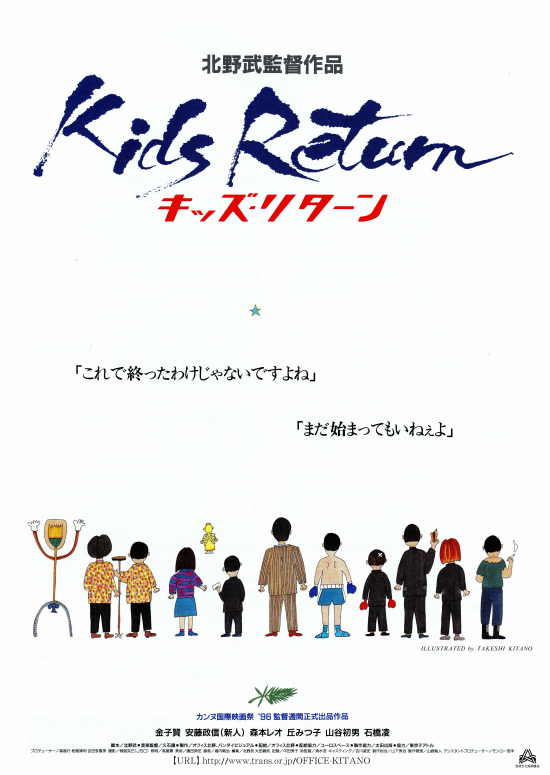