Directed by the legendary indie filmmaker Edward L. Cahn(“The Music Box Kid”/”Secret Of Deep Harbor”/”Invisible Invaders”), a maven of zero budget pulp films, who here makes the most of a whacky complicated screenplay by Orville H. Hampton and gets a lively star performance by Bill Williams, as the controversial gun-toting D.A. Temple Houston, to make this western a keeper.

Crooked railroad agent Bigelow (Grant Richards) plots to goad the Cherokee nation to declare war, hoping their lands, according to an 1867 treaty, could thereby be taken over by the railroad. Bigelow thereby frames for the murder of the Indian Commissioner the Cherokee chief,Chief Buffalo Horn (Ted de Corsia), and prosecuting DA Temple Houston, a life-time friend of the chief, at first gets him convicted. But the DA’s sense of justice prevails and gets him released when upon further investigation discovers he’s innocent. The quirky climax, has Temple, force at gun-point a Federal judge to re-open the case and as a result gets an acquittal.

Notable cult actress Gloria Talbott plays an Indian maiden who has a romance with Temple. 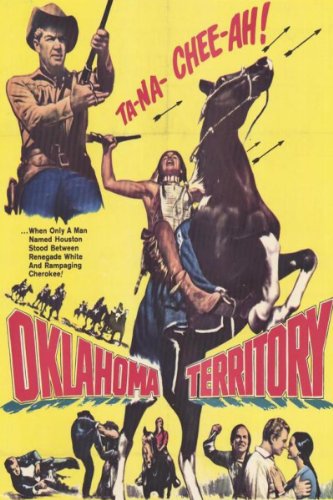