RKO Pictures could have had one of the great detective series which it launched in 1932, which starred Edna May Oliver in The Penguin Pool Murder. But she left the series after only two more installments, leading to a rapid decline in the quality of future films. Veteran B-film director George Archainbaud (“Hunt the Man Down”/”Wagon Team”/”Apache Country”) does a great job with the pacing and comic timing to tell in his unique visual style this most engaging crime detective narrative. The witty screenplay by Willis Goldbeck is based on a story by Lowell Brentano and the novel by Stuart Palmer.

In the opening scene the New York City Aquarium directorBertrand Hemingway (Clarence Wilson) violently complains on the phone to his unscrupulous stock broker Gerald Parker (Guy Usher) that he cheated him and thereby he lost all his money. At home Gerald accuses his pretty trophy wife Gwen (Mae Clarke) of being unfaithful, as he overhears her talking to her former lover Philip Seymour (Donald Cook) about meeting him at the aquarium and slaps her hard across the face.

At the aquarium, sharp-tongued elderly spinster schoolteacher Hildegarde Martha Withers (Edna May Oliver) trips up deaf-mute pickpocket Chicago Lew (Joe Hermano), but he escapes from the bumbling police. Then Ms. Withers halts her class tour, as she asks her students to find her missing hatpin. The pin is found by the side of the penguin pool, where Gerald’s dead body is found floating in the penguin pool.

Inspector Oscar Piper (James Gleason) heads the investigation, but Ms. Withers proves to be a better detective and teams up with the inspector in his investigation despite this being a blow to his pride. Meanwhile ambulance chasing lawyer Barry Costello (Robert Armstrong) talks murder suspect Gwen into retaining him as his lawyer and her sappy boyfriend Philip confesses to a crime he didn’t commit by saying he drowned the vic.

When the medical lab report comes back saying that the victim’s cause of death was that he was stabbed in the right ear by Ms. Withers’ hatpin and not drowned as first thought, Ms. Withers lays a plan down to trap the clever killer.

Edna May Oliver was perfect for this role, and her feisty performance made the film glide along at a fast pace. It’s a gem; a film far superior to the Charlie Chan serial and most others of the same type–and, in my opinion, the Oliver characterization is even more entertaining than Agatha Christie’s Miss Marple. 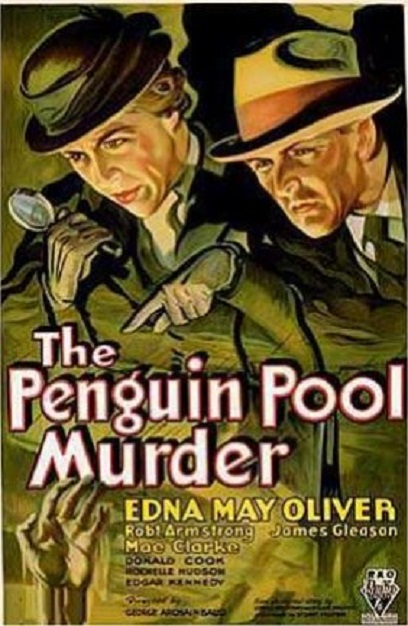 WHO’S THAT KNOCKING ON MY DOOR