An episodic film by the politically motivated once Islamic fundamentalist leaning Iranian Mohsen Makhmalbaf that tells three bleak stories about social issues in the modern day slums in and around Tehran, with each story more depressing than the other and without the benefit of much humor. This film captures the harshness and cruelty of the human condition. It’s a film of tremendous raw power that might satisfy those who can take looking at such agonizing subject matters without feeling queasy. There’s a pickled fetus slowly turning in a jar, a sheep slaughtered, and the showing of the elderly left to rot. The point made is that for the poor their struggle is only futile and leads only to an ugly death.

The first story is about an impoverished and uneducated naive couple who are cousins. They attempt to find someone to adopt their newborn daughter. They have three children who were born as cripples and with the birth of their new daughter they are afraid she will also be crippled. There is one frightening scene where the mother is trapped in a children’s mental ward and they are all laughing maniacally at her.

The second part is an even more unpleasant tale about a mentally retarded young man who takes care of his elderly invalid, mute, and senile mother. The couple from the first story are briefly in this episode.

The third part is about an Afghan peddler expecting to be killed by the same criminals who supply him, after he witnessed a gangland murder. It plays as a noirish-like fantasy, as the peddler is driven mad by his disturbing visions of his impending death. His panic is induced because his criminal suppliers suspect he might have betrayed them.

Reportedly Makhmalbaf explained that the film dealt with the three stages of existence–birth, life, and death. They are all shot in different styles and with different cinematographers. 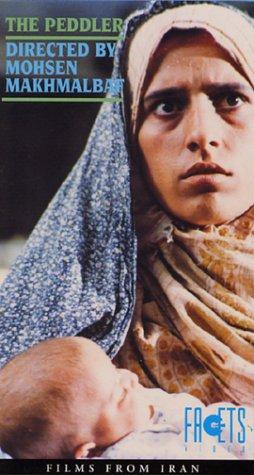