“No one does a revenge tale better than Lang.”

In the second part to his mythical adventure epic Siegfried, director Fritz Lang (“The Big Heat”/”Fury”/”Metropolis”) continues the tale of the 13th Century Norse legend. The two parts make for two entirely different films, even though both films tell the legendary tale that is best known through Richard Wagner’s Ring cycle. The first part is mythic while the follow-up is more like an historical epic soaked in a bloodlust. The Kino DVD presents the restoration work done by the Munich Film Museum and adds 50 minutes to its previous US releases. It also features a soundtrack of Gottfried Huppertz’s original score recorded by the Munich Radio Orchestra. It’s admittedly slow going until the extended bloody climax, but that bloody revenge scene is worth waiting around for because of its lively action and riveting dark emotional scenes.

After Siegfried’s death, his grief-stricken wife Kriemhild (Margarethe Schoen) — sister of King Gunther (Theodor Loos) — is consumed by hatred and an unquenchable thirst for vengeance on his murderer, her half-brother, Lord Hagen Tronje of the Niebelungs (Hans Adalbert Schlettow). Kriemhild says when Siegfried died, she died. Realizing that King Gunther is too weak-willed to do the job she accepts the pleas of Rudiger von Bechelarn (Rudolf Rittner), the loyal ambassador, on behalf of King Attila (Rudolf Klein-Rogge), head of the Huns, and agrees to marry the king with the intention of bringing down her brother’s kingdom and getting revenge on her husband’s killer. Hagan has stolen the magical sword and the Nibelung treasure, yet Gunther fails to act. Kriemhild leaves her family without any goodbyes, and settles down with the savage warrior tribal Huns in their forest location.

Much later she has King Attila’s child. For political reasons, her hubby invites the entire Burgundian procession, including Hagan, to a “state affair” held in the Huns’ palace, where she executes her revenge plan by taking the Burgundian guests hostage. In the violence that ensues Hagan slays her child with Siegfried’s magical sword. There’s an attack by the Huns, but the Burgundians repel it and remain loyal to Hagan and refuse to give him up to her. When told her brothers will die, as the Huns outnumber their foes, she only promises to free them if they’ll kill Hagen. Their refusal leads to the film’s climactic bloodfest, during which Kriemhild metes out justice with Siegfried’s magic sword, after burning down the palace to flush out Hagan. Also every Burgundian is killed, including all her relatives.

No one does a revenge tale better than Lang, who goes full circle showing there’s little difference between the killer of Siegfried and Kriemhild’s bloodthirsty vengeance. Again, like the first part, it’s a visually striking film that puts on display how love can turn to hatred and the dark consequences that follow. As an exploration of the dark side of human behavior, it’s unforgettable and powerful. 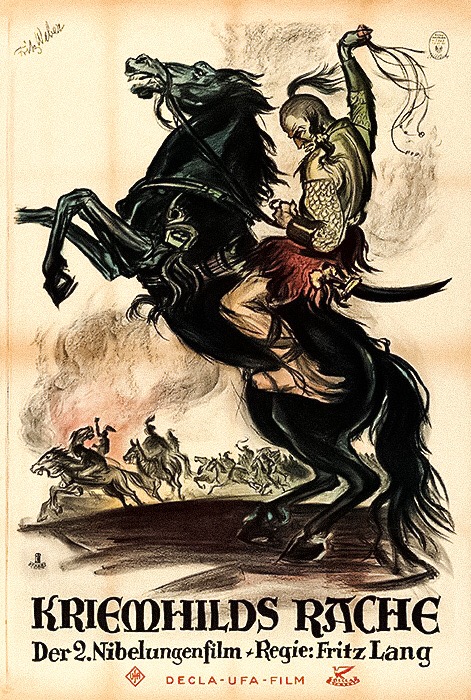