“Aside from Marty, this is my favorite Ernest Borgnine role where he plays a good guy.”

Reviewed by Dennis SchwartzA solid old-fashioned crime drama based on the true story of NYPD’s Lt. Joseph Petrosino (Ernest Borgnine). Though fictionalized and at times uneven in its storytelling, it still seems authentic because it captures the local flavor of the period. It’s set between 1906-1909, in NYC, mostly in Little Italy, and details the story of the lieutenant’s fight to stop the Sicilian Mafia involvement in crimes in Manhattan’s “Little Italy,” to overcome the immigrants fear of trusting the cops and to prove there’s a Mafia operating in the city. It’s directed with grit by Richard Wilson (“Al Capone”/”It’s All True”/”Man With The Gun”),who co-writes it with Bertram Millhauser and Richard Collins. Aside from Marty, this is my favorite Ernest Borgnine role where he plays a good guy.

In 1906, in Manhattan’s Little Italy, after there are a few violent attempts at extortion of Italian small business owners by the Black Hand, a mafia organization started in the old country, and it’s found the victims are too afraid to talk, Lt. Joseph Petrosino (Ernest Borgnine) gets approval by the police commissioner (Robert F. Simon) to form a special squad made up only of Italian policemen and it’s called the Italian Squad. The squad goes undercover, posing as members of the community and thereby are able to identify and convict a number of Black Hand criminals, something that never happened before. One of Petrosino’s accomplishments is saving the life of the great opera singer Enrico Caruso (Howard Caine) from a bomb planted in the singer’s limousine, after he was threatened by the Mafia to pay or die.

Wilson keeps things tense until the end, and manages a number of memorable scenes that include: the opening scene of a Mafia caused accident of a little girl (Judy Strangis) dressed as an angel in an afternoon outdoor Italian religious festival. The angel falls to the street and breaks her back and legs when the rope was cut by a thug, from one of the apartments used in her crossing. Secondly, when Petrosino’s gunned down in the deserted night streets of Palermo when the Sicilian Mafia boss, Don Cesare (Carlo Tricoli), orders his hit after identifying himself. And, lastly, the Mafia enforcer goons, led by the vicious Lupo (John Duke), roughing up the baker Saulino (Bruno Della Santina) in the dawn hours when he opens his shop to light the ovens and the laughing thugs stuff him in the oven for not paying the extortion money. When the the middle-aged Lieutenant gets the baker’s case, he finds time to romance the baker’s twenty-year-old educated daughter Adelina Saulino (Zohra Lampert) and marries her before going to Sicily to check-out the Sicilian Mafia connections to America. 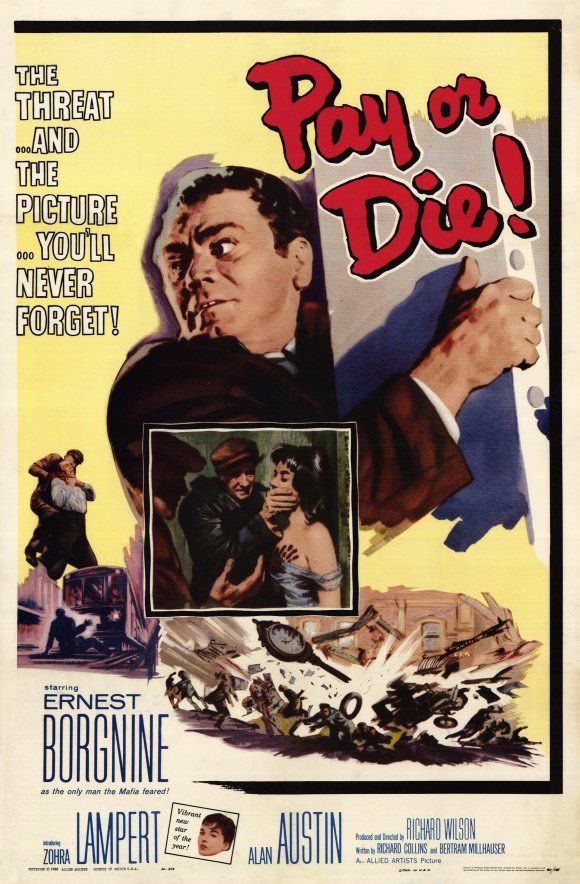