“A summertime fun monster blockbuster B- film for the kid inside us that never grew up.”

A summertime fun monster blockbuster B- film for the kid inside us that never grew up. Reign of Fire combines action and nonsense into one cartoonish package, where the fire-breathing dragons seem more perceptive than the humans. The film should satisfy the casual movie-goer who has come to value how far film has come with special effects and doesn’t mind that it ignores character development, is silly, and has many storyline glitches. The utter stupidity of this venture won me over for the day. The heat must have gotten to me as I found myself ogling with envy at those CGI created dragons, was spurred on by those dogfights between man and dragon, and caught myself laughing at those silly humans stuck in a bad situation. My insincere admiration is for the filmmaker, Rob Bowman (The X-Files), who at least didn’t take this comic book/fairy tale seriously. That’s about as complimentary as I care to get. I’m quite sure the filmmaker can defend this kind of escapist action genre film without any need of my assistance.

It begins in modern London, where a 12-year-old named Quinn is about to have a pretty awful day. He’s seeing his divorced mom (Krige) to tell her his school scholarship has been lifted. She is the supervising construction-site engineer of an underground subway project. When one of the workers invites him to explore one of the tunnels just dug, he runs out in horror as if he saw a monster. Well, what he saw was a dragon, and his mom and the workers were killed as he managed to escape from the awakened dragon spewing fire from his mouth.

We go forward to the post-apocalyptic year 2020 and learn the dragons have really gone to town after rudely awakened from their long slumber. They all but conquered the world, flying around in groups and destroying just about anyone who sticks their head out. The dragons survive by eating ash. Quinn (Bale) is now a boring, guilt-ridden grown man in need of a woman to touch him and help raise the child he adopted as a baby, who is now a teenager (Moutter). Quinn’s personal horror story is also the world’s — all because he thinks ‘why didn’t I let the sleeping dragon alone!’ He has a stylish red beard and passionately heads a commune of survivors desperately existing in a castle in rural Northumberton, England. They have burrowed themselves into the castle, and are hoping against all odds to harvest a crop soon and wait the dragons out. Some married members are impatient to save their children from starvation and wish to travel into the fields to collect some food, even though they realize they will probably be burnt to a crisp if they attempt this desperate act. Quinn and his right-hand crony Creedy warn Eddie (Kennedy) that their best chance for survival is sticking together and keeping secure in their shelter. To keep up morale they issue directions to the many children in the compound in the form of chants in unison, which acts to bolster both their and the children’s confidence if danger strikes. The adults also put on a bedtime “Star Wars” play for the children, where the Mighty Quinn amusingly takes credit for coming up with the original idea for the “Star Wars” myth.

Into this desolate landscape, comes a ragtag contingent of American army personnel in tanks and some on a chopper. Quinn tells Creedy in the film’s only funny line, “The only thing worse than a dragon is an American.” The American leader, a muscular, tattooed super-macho brute with a shaved head and a scraggy beard, who goes by the handle of Van Zan (McConaughey), talks his way into the armed compound by saying he’s a “dragon slayer.” Well, if you say you’re an ass-kicking dragon slayer, then by golly you better prove it — as Van Zan gives this film the action it’s all about. Chomping on his unlit cigar World Wrestling Federation looking Van Zan goes through with his ‘I’m an Ugly American act’ and intimidates the whole compound, but the Brits soon forgive his coarseness and realize the uncouth Yank wants to fight their battle by taking the offensive against the dragons. A few of the farmers even volunteer to work with him as hunters. The attractive chopper pilot Alex (Scorupco) loses a few of her so-called archangels in battle, but the compound rejoices that they got one dragon. But Van Zan is upset and reminds the revelers at that rate, it would take them over three hundred years to make some headway in killing all the dragons.

Who would have ‘thunk’ it, but Van Zan does … that all the dragons they see are females. Quinn mentions that he has no time when running for his life to notice the plumbing. The humorless and undeterred Van Zan — who at one point told Quinn “I lead, you follow” — mentions that there’s only one male dragon to fertilize the eggs the females lay and if you kill him the dragons are finished. All I could say is, that’s good news … because I was getting a little edgy about this time and was hoping things wouldn’t drag on to where you had to kill all those computer-generated dragons one at a time. I was thinking, if the script went that way then I would have been in for a long and trying film. But thankfully it takes only three brave souls to save the world, as Quinn, Van Zan, and Alex go to London to find the male in the womb-like underground nesting area and do battle there. That is where the young Quinn started this whole mess, and that’s where he regains his confidence to lead his team to slay the dragon.

At least Reign of Fire is not the pits (though who would have ‘thunk’ that from the plotline) and it has a nice clean ending where the children, who are the future of the world, can rest assure they won’t have a dragon problem again. I felt comforted by that, just as I did when I was ten and watched the Superman serial chapters come to an end in such a just way. 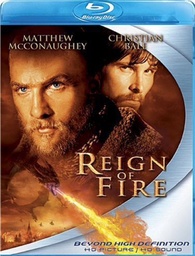 BEAUTY FOR THE ASKING