A formulaic senseless action sci-fi downer based on the short story by Philip K. Dick. The studio heads got the title right–it’s all about getting a fat paycheck. Hong Kong filmmaker John Woo (“Face/Off”/”Windtalkers”) continues in his same mindless action vein now that he’s settled down in Hollywood and is on the big-budget blockbuster ride, making the same type of dullish gimmicky action flicks time after time while still unable to do a story or develop characters or induce an intelligent theme. He annoyingly throws out a few of his now stale signature flourishes, which fail to create any excitement for this absurdly scripted vehicle. Ben Affleck continues his streak of very bad films. He’s robotic as an actor and it’s a wonder how he continues to be cast as a superhero in action films when he’s so physically and mentally unfit for such a role, and it’s more of a wonder that he’s found enormous popularity with the public in just such roles. You can get bigger thrills playing computer solitaire than you can watching this dumb thriller, which is anyway more of a video game than a movie.

Michael Jennings (Affleck) is a world renown genius electronic engineer who is hired by a megacorporation to steal ideas from its competitors and then tinker with those ideas so they could be used in a more refined way. He has his short-term memory erased after each job to avoid revealing secrets, and it’s made clear that he does this risky job only for a big paycheck. It’s implied that he might be a heel, but he’s similar to the average greedy joe on the street who would do the same if they had the opportunity. On his next assignment, Michael accepts an offer by long-time employer and old friend Jimmy Rethrick (Eckhart) to get involved in a top-secret project that could change the world. It will bag him a nice eight-figure wage, enough to retire on. The only catch seems to be that a safer memory-elimination procedure is being used, but one that can erase three years instead of the usual few months.

When Michael comes out of that job where he invents a machine that sees into the future, he soon finds everything has gone wrong. He’s been setup by Rethrick and the FBI brings him in for treason, as they grill him on the government classified information he illegally used to invent such a powerful machine for his employer. With his mind scrambled, the disorientated Michael tries to reason why he forfeited the money for 20 seemingly worthless personal items such as a watch and sunglasses and an unfinished crossword puzzle enclosed in a large manilla envelope. After he escapes the FBI grilling room his only ally is sexy biologist Dr. Rachel Porter (Thurman), whom he doesn’t quite remember since their relationship began in the three year period he had his memory removed. With the money not there and his life in jeopardy, Michael goes on-the-run from both the law and Rethrick’s corrupt organization and soon realizes that it’s up to ‘little old him’ to save the world–you see he might not recall the recent past but the machine allowed him to see the future. It was just plain boring to watch Michael go through the numbers and use those personal items as clues to fight off his enemies and save the world. The action scenes never came to life, leaving the viewer without an escape hatch from this mess.

Michael also has a longtime friend he could trust who is named Shorty and he has the distinction of being in an early scene and then vanishing until reappearing at a much later time, where Michael is reminded that he told him not to take that job. Character actor Paul Giamatti plays this loyal second-banana role of Shorty and makes faces and tries to be amusing, but what he’s doing in this film is never made clear. As a matter of fact, what I am doing watching a film I knew couldn’t be any good was also not clear. This is the kind of film they should pay you to see, instead of you paying an admission or even getting in on a pass. 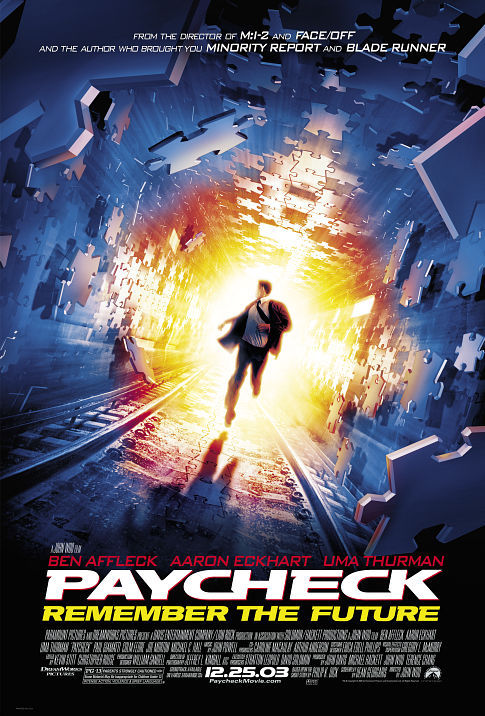