An unpleasant, solemn and overwrought melodrama about an embittered Jewish Holocaust survivor still haunted by his stay in Auschwitz, where he witnessed his wife’s rape by camp guards and is devastated that he survived the camp while his wife and family did not. Director Sidney Lumet (“A Stranger Among Us”/”Equus”/”Critical Care”) keeps it arthouse bleak, painstaking and misogynist. It’s an episodic film that rekindles the Holocaust experience in the run-down violent contemporary Harlem, but in somewhat shocking contrived ways. It’s based on the novel by Edward Lewis Wallant and is written by David Friedkin and Morton Fine.

Rod Steiger is Sol Nazerman, the Long Island suburbanite, carrying on a cautious romance with a fellow emotionally crippled concentration camp survivor (Marketa Kimbrell), and is a Harlem pawnbroker, who is dead inside and hides his pain by showing a disbelief in God, detachment, and a contempt and indifference to people. It’s Steiger’s powerful performance that carries this wannabe important film through its doldrums and into its less than startling revelation that one must care about people to be human.

Through the pawnbroker’s daily work routine we learn of why he died inside in the prison camps (through flashbacks) and how he now deals with it as a survivor (insensitively treating everyone and bearing insults with indifference). Geraldine Fitzgerald is the lonely new youth center social worker who tries to befriend Sol and get him to open up. Jaime Sanchez is Ortiz, the not-too-swift energetic neighborhood Puerto Rican youth hired as Sol’s assistant, who is ambitious to learn the trade from his boss and leave his life of petty crime and make a respectable life with his prostitute girlfriend (Thelma Oliver). Brock Peters is the egotistical brutish Harlem crime boss, who pays Sol to use the store he rents to him as a front for his rackets. Juano Hernandez is the regular customer who comes to the store to pawn things as an excuse to talk, because he’s lonely.

When Sol is robbed by three of Ortiz’s former friends, the callow youth changes his mind about his part in the robbery when his boss is about to get shot and instead takes the bullet meant for him. The stunned pawnbroker shows emotion and grief for the first time in the pic, as he exits his East 116th store in Spanish Harlem supposedly as a new man (it’s debatable whether he will be driven to further suffering or become more human now that he’s been stripped of his protective armor of indifference).

Lumet fills it with Resnais-like flashbacks, But aside from its crisp editing, Method acting bravura performance by Steiger and slick production values, it never measures up to being a great film that has something endearing to say that isn’t obvious or questionable. 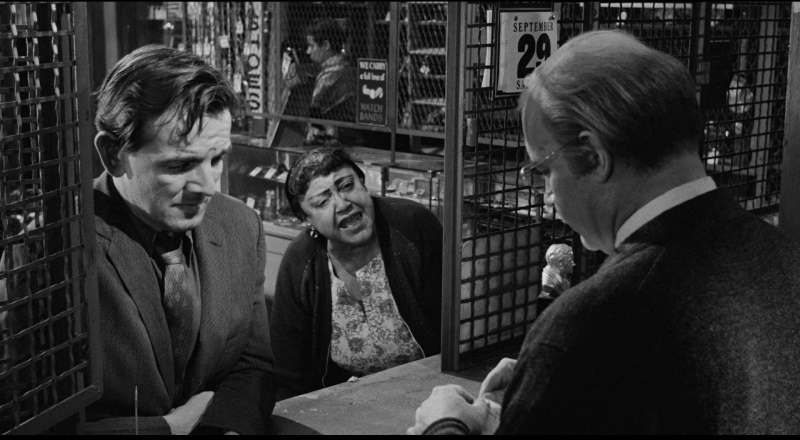