In the musical biopic of the gay tormented 19th-century Russian composer Peter (Pyotr) Ilyich Tchaikovsky (Richard Chamberlain), British filmmakerKen Russell (“Tommy”/”The Devils”/”Mahler”) shuns accuracy and narrative structure in favor of his usual excesses, vulgarities and melodramatics. The result is one of his more entertaining self-indulgent works, that like its subject has the filmmaker loom as an eccentric artistic soul who straddles the line between genius and madness but settles in the end for only the perverse. It’s based on the novel Beloved Friend by Catherine Drinker Bowen and is written by Melvyn Bragg and Barbara von Meck. It strains credibility by placing too much emphasis on the piano teacher’s loveless marriage to nymphomaniac Nina (Glenda Jackson), an unconsummated marriage that supposedly causes him to stop composing and it ends with the bride in an asylum. We’re led to believe it was the women in Peter’s life that caused him the greatest pains, that includes his mercenary sister-in-law Sasha (Sabina Maydelle) and his manipulative pimp mother-in-law (Maureen Pryor), whose meddling in his bad marriage made things unbearable.

In 1875, Moscow Conservatory music teacher Peter Tchaikovsky is a carefree fop shown interacting with his foppish lover Count Anton Chiluvsky Christopher Gable. Warned by his protective brother Modeste (Kenneth Colley) to keep his private affairs secretive (his affair with with his copyist Alexi (Bruce Robinson) is known throughout the school) or else risk never getting his music published. Peter despite all the rumors of his gay affairs is supported by Rubinstein (Max Adrian), the conservatory head. While previewing his latest piano composition at the school, Peter’s passionate performance wins over in the audience two strangers–the student Nina Milyukova and, his soon to be patron, the wealthy, reclusive, middle-aged widow Madame von Meck (Izabella Telezynska). In real-life, Peter never met his patron. Rubinstein, on the other hand, goes into a rant, and insists the composition be re-written. This is rejected by the agitated composer.

Fearing public censure because of his homosexuality, Peter agrees to marry social-climber Nina. But wishing only a platonic relationship, he will learn later that his wife is a nymphomaniac and the inability to get a good fuck supposedly leaves the lady with a personality defect that lands her placed in the madhouse by her mom.

The pic is visually stunning; the sets are arty; the music is loud, moody and accessible; Chamberlain gives a surprisingly good performance and Jackson has no trouble getting into character; but there’s no subtlety and no sense we’re watching a genius composer. By the time Peter contacts cholera, the same disease that killed his mother (Consuela Chapman), he utters he tried to love but can love nothing outside of his music. With that, the pic has laid out Peter’s musical contributions and the difficulties he had in his personal life as a neurotic. It seems tacky enough to be a cult favorite and not a film that can get beyond surface Freudian impressions of the composer. The film’s highlight scene of the composer ejaculating as the cannons are fired at the heads of his enemies in his “1812 Overture” brought back memories of the angst depicted in teenager Kenneth Anger’s Fireworks (1947). 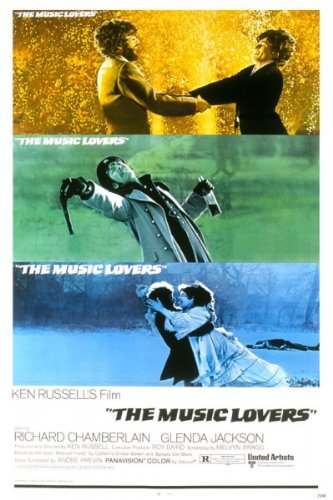