Patterns is based on the teleplay of Rod Serling which was aired live on TV in January of 1955 on Kraft Television Theater, and was so-well received that it was repeated four weeks later. That was something not done during that period. This brilliant script by the creator of the Twilight Zone, Rod Serling, is considered by many as the finest piece of writing he has ever done and brought him instant acclaim. It is ably directed by Fielder Cook, and tells a tale about a power struggle in a giant New York corporation as an older executive is being phased out by a younger replacement. The ensemble cast is superb, with special kudos to Van Heflin, Ed Begley, Beatrice Straight and Everett Sloane. This is Van Heflin’s finest role since Shane (53). Beatrice Straight was to go on to win an Academy Award in Network (76) as a supporting actress. Many considered this Sloane’s finest role in his illustrious career. While Begley caught the proper anxiety mood of the aging executive fighting for survival, and gave that discriminated group the human face it needed.

Fred Staples (Van Heflin) has just been lured away from a small town in Ohio where he was the big fish among the little fish and has taken an important new executive position in the giant Ramsey corporation of New York City. It’s located in a 40th floor skyscraper that features hallways that dazzle like a cathedral and corridors with an eerie Kafkaesque tunnel-like entrance to the offices. Fred’s an engineer who specializes in industrial relations, and the ruthless but efficient boss, Walter Ramsey (Everett Sloane), has hired him to take the place of the firm’s number two man, the 62-year-old veteran of over 30 years service, the VP, Bill Briggs (Ed Begley), without either of his employees knowing his intentions. Bill was an original member of the firm, which was founded by Walter’s father. The father was more of a people person like Bill, and had more concern for his workers than does the son. But the son is a successful bottom line business man, who by acquisitions has made the firm larger than ever. He detests Bill and his soft-hearted humanistic approach to business, but can’t fire him because of his seniority and therefore hopes instead to humiliate him in order to get his resignation.

The film is very effective in showing how the white male executives bond and co-exist in such a tightly confining spot, and how there’s always tension and concern for one’s health. Bill suffers from heart problems and an ulcer, ailments quite common among such executives. It’s also shown how behind every successful man, there’s a woman. Fred’s wife Nancy (Beatrice Straight) is the ideal wife for the executive on the rise, as she knows how to stroke the boss at a dinner party and how to entertain her hubby’s executive peers. She also knows how to give the boss a report that Bill and Fred were working on together, and making sure her hubby gets all the props. The boss appreciates that, but Fred is miffed at the idea of stabbing his friend in the back.

Since Fred’s a decent guy he refuses to climb the ladder by stepping over his friend Bill, though he admittedly is ambitious. What concerns him, is what price does he have to pay to advance to the top. The corporate ‘survival of the fittest belief’ is viewed as nothing but an apology for capitalism. Serling’s script pushes the envelope, as it wonders what is the tolerance level one has for abuse before pride sets in and one acts on principles to do what is right.

The women in the workplace are all loyal secretaries who are part of the scenery and subservient to the men. Marge Fleming (Elizabeth Wilson) is Bill’s loyal secretary who is transferred by Ramsey to Staples, and resents working for him until they reach an understanding. Miss Lanier (Roos) is the efficient head secretary, who assumes an executive role as she takes her orders directly from Ramsey and reflects his no-nonsense business tone. The other secretaries share the company gossip over their coffee breaks and act bitchy, and have an eye out for the winners and losers.

It’s a forceful melodrama, that takes the viewer into the pits of a big corporation’s board room politics, backstabbing, and the tough way of doing business. Things have changed since the 1950s which make some things outdated, but the film still has its finger on the savage nature of the business world. Even when a company is not as corrupt as an Enron, people are still perceived as secondary to making a profit no matter what. 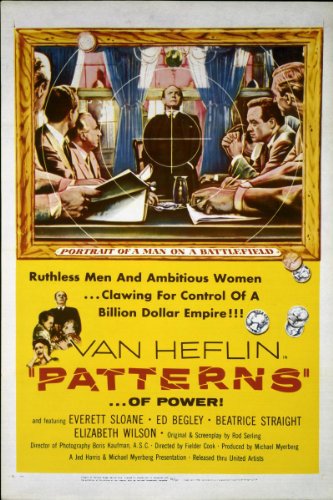