Carl Theodor Dreyer’s emotionally intense masterpiece, The Passion of Joan of Arc, soundly evokes the passion and resonance of France’s heroine, the soul of her country, who was burned at the stake in 1431 for being a heretic and then in 1920 was made a saint — as if time can heal such wounds.

Not relying on the standard techniques used in silent films during that time frame, nor on the avant-garde and Surrealist’s vision of the radical 1920s on debunking the church, the Danish filmmaker, Dreyer, concentrated on making an intensely personal film, a film that eluded any known styles. Nevertheless he constructed an exact replica of the trial scene for this big budget film, using the style of German expressionism for his set design.

The Passion of Joan of Arc featured many close-ups of Joan (Renée Maria Falconetti) and the judges, and used the symbols of the church to show the extent of its authority. Dreyer records the story of the 19-year-old illiterate who called herself France’s savior and who faced her accusers and challenged their authority. Though the film appeared to be shot without any long and medium shots, that was not the case. It just seemed that way because Dreyer for reasons of getting at the truth without any other interference had made isolated shots of Joan, showing how alone she was from her accusers and from the soldiers and peasants watching the trial; and, these shots became abstractions, allowing you to think of them as being solely close-ups. It is because of this style that we are forced to concentrate only on the main players and on the truth of the trial, and our attention is not diverted in any other direction.

The genius of Dreyer in assembling a cast that was perfectly suited for their parts is a major reason for this critically acclaimed icon in the history of filmmaking to come up with a film as absorbing as this one was. Dreyer chose as his Joan a young French stage actress, known for doing light comedies. He picked her because under her skin-deep beauty and makeup he saw her soul and the simplicity of her nature. No actor wore makeup, every attempt was made to make things seem as natural as possible. Dreyer was rewarded with his choice for actress, by getting from her one of the greatest magical performances ever seen in the history of films. Falconetti, interestingly enough, never made another film, but instead chose to go back to doing light comedies on the stage, except for a brief respite where she repeated her Joan role on the French stage. The rest of Dreyer’s casting was also inspired, this time by him choosing a mixture of professional actors and those chosen in the bistros, as he opted to cast for his English General Warwick someone who in real-life was a cafe-keeper. For the evil bishop he chose Eugène Silvain, who was a professional actor in his seventies, best known for his work in French comedies. Antonin Artaud, noted bad boy artiste of the avant-garde theater and later on noted for going mad, played the sympathetic Brother Massieu.

The film’s opening is a study in starkness. It starts off as a pair of aged hands turn the soiled pages of an old book; in the next shot, the past comes alive with the entrance of the ecclesiastical judges of Joan’s trial. The contrasts between the two shots will be a recurring theme of the film: historical events will seem to be eternal. As the judges settle in for the trial, they are shot huddling together, seemingly ‘in on the’ conspiracy to get the innocent maiden, and on their glutton faces are the looks of craftiness and hypocritical sympathy for the girl they are persecuting as a witch.

Joan, the peasant soldier hero of Orleans, who hears God’s call to save France, has been made to defer from her plans to attack Paris with the king’s full support. When she insists on carrying on her mission in some outlying cities, she is captured by the French loyal to the British and turned over to the British to face her trial as a heretic. The film will only cover her church trial and her execution in Rouen, ignoring her activities as a soldier and as a nationalist.

Joan is seen in short-cropped hair at her trial, answering the judges’ contemptuous questions, as they challenge the voices she hears as being from God. She is asked, “Do you believe God loves or hates the English? Joan: “I know nothing about that. Judge: “Was the Saint Michael you conversed with, naked? Joan: “Do you think God lacked the means to clothe him!” Judge: “Why do you wear a man’s dress?” Joan: When I have done what God sent me to do I shall resume wearing a woman’s dress.” Judge: “What reward do you expect from God?” Joan: “The salvation of my soul.” These are some of the highlights from the trial, as these supposed learned men question this peasant girl and attempt to get her to say that the voices she heard came from the Devil.

When Joan fails to respond to the questions as the judges would like, the judges decide to up the ante. They refuse her wish to be heard by the pope, saying they are the ones who are fit to serve as her judges and they allow her to become a target for taunts by the English soldiers guarding her; and, as an added bit of vindictiveness, they even refuse to let her hear mass; she will also become subject to the judges’ physical methods of torture. Her retort is that any confession gained by such means, she will recant when the torture stops. As a further cruelty, she is bled and weakened even more. And all the time the intensity of the faces close-up and the guile of the bishop heading the interrogation is stripped to the bare essentials so that at the climax of each scene, a meaning is projected into a few stark images: a face, a crown of reeds, a flock of birds flying away, a cross being held by a priest, spears held up by the soldiers, a spike-studded wheel, and a stake being prepared.

The filmmaking of the trial was so austere that it was easy to believe that this was the actual trial taking place. Dreyer’s use of the transcripts from the actual trial was an ingenuous move on his part, as well as having the priests tower over Joan and all the shots of the priests looking and gesturing to each other, conveying the nature of their evil conspiracy against her.

One of the most horrifying scenes, that brought genuine tears to the young actress playing Joan, was when she was being prepared to go to the stake and her short-cropped hair was being cut further. The scene was so intense that when it was being shot, all the stagehands brought her flowers on that occasion and Dreyer made the gesture of taking her tears gently into his hands in a moving tribute to her performance and how powerful it was.

Fooled into accepting the judges’ offer of recantation Joan signs a confession renouncing her errors; but, when the church passes sentence on her saying they will spare her life from being burned at the stake for a punishment of perpetual imprisonment, Joan changes her mind and chooses death. She tells the judges, “I denied God to save my life.” She goes on to tell them: “that she is God’s emissary, she cannot change her beliefs that she was born to save France from the English and carry out God’s orders; and, her final victory will be a spiritual one, in the form of martyrdom.”

Dreyer’s vision of Joan, was to reconstruct the external reality of Joan’s humanity and depict her only at her trial and show how she is prepared to willingly die for what she believed in. The film’s spiritual sense is placed in the moral rectitude of Joan and her willingness not to forgo suffering. What captures one’s imagination about Dreyer’s version of Joan — and this film is almost completely his version, as he all but ignored Joseph Delteil’s slight novel on which the film was based on — is that Dreyer recognized that Joan ultimately took a stand for all those who are opposed to social authority and who are determined to be true to their own nature and are prepared to offer whatever self- sacrifice is required.

Dreyer’s austere and no frills style of filmmaking uses mixtures of blacks and dark grays to shoot the judges’ hardened souls and a soft gray to focus in on Joan as the camera gets fully at Dreyer’s subjects, leaving no room for doubt that this is a study in contrasts: of the smug, cocksure faces of contempt on the questioners, the lackeys of a corrupt political government and an equally venal church authority, working hand-in-hand with each other, in a trial that was rigged from the start by the English powers and the French clergy. In contrast, is the honest gaze exhibited from the close-up of Joan, who seems to be so much the better of a person than those pack of phonies she is forced to look at and be condemned by. We are forced by him to see how the faces of evil are contrasted with the face of a good person. Dreyer’s abstractions of sticking to the shot he takes until you see what you have to see, is a genius way to film. The images leave you with a feeling of real sorrow for Joan, as she is finally burned at the stake. It was a trial that seemed in the film as if it took a day or two but went on for about five months, in actuality.

This is one of the most memorable films ever made. Joan is burned at the stake in front of a group of grieving spectators. They begin a riot that is violently suppressed by the presiding English military, as a rock is thrown through the church window. The church is blamed by the crowd for what the English did to her, with the greater implication being how the powerful ones still remain as the world rulers and how the innocent may suffer dire consequences from them when they clamor for the truth they hold so dear from within themselves. 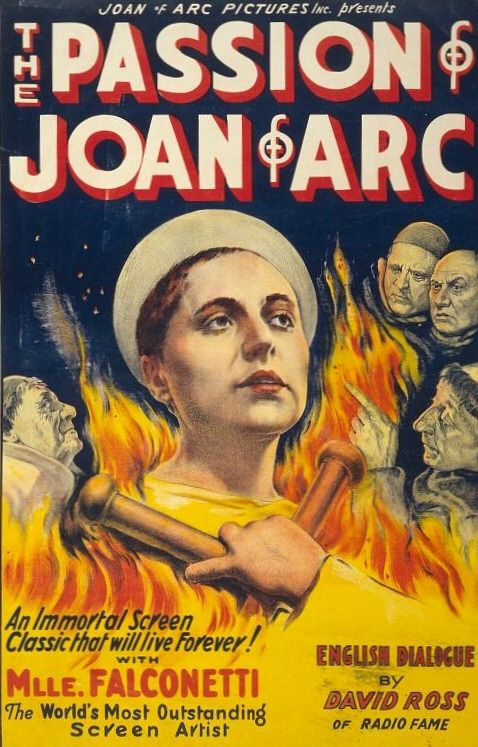