A pleasing melodramatic silent directed by the great Yasujiro Ozu (“The Record of a Tenement Gentleman”/”Early Summer”/”Late Spring”); he’s the co-writer with Tadao Ikeda. This was Ozu’s 29th out of a total of 54 films he was to make in a productive career that spanned from 1927 to 1962. It was the first of a series of Ozu films to star the endearing roguish “everyman” single dad played with great conviction by Takeshi Sakamoto (a role player in Ozu’s films since 1928). It’s a humorous and heartfelt family drama that takes an observant look at a close father-son relationship that goes through a few bumpy episodes over money issues, an ill-advised flirtation with a younger woman by dad and brings up the importance of living in a community held together by a collective sense of looking out for one another. It seems like a reworking of The Champ (1931), an American picture that starred Wallace Beery and Jackie Cooper. Though talkie pictures were in vogue in Japan, the old-fashioned Ozu held out until 1936 to make his first talkie feature—The Only Son. The much acclaimed Passing Fancy won the prestigious first prize from Kinema Jumpo.

Playful and oafish middle-aged beer factory worker Kihachi (Takeshi Sakamoto), who has a heartwarming expressive smile, and his best friend, the more sullen younger factory worker Jiro (Den Obinata), are impoverished but are happily raising together the widower Kihachi’s frisky and undisciplined 8-year-old son Tomio (Tomio Aoki). The kid is a good student but his poor manners hold him back from the head of his third-grade class. After being entertained by balladeers at a town meeting hall in their working-class Tokyo neighborhood, a drunken Kihachi with Tomio in tow becomes infatuated with the young girl Harue (Nobuko Fushimi) he meets outside the hall. She finds him too old, and instead is attracted to Jiro. But he coldly rebuffs her. Harue, who just lost her factory job and finds herself homeless, is hired to work and live in the nearby restaurant of the kindly widowed older woman Otome (Chouko Iida), through the interjection of Kihachi. The slovenly dressed Kihachi makes a futile attempt to win Harue’s love, but she only looks upon him as a kindly uncle. The attention Kihachi pays Harue causes Tomio’s classmates to tease him about his father being illiterate, taken with a younger woman and a drunken idler. When the restaurant owner formally visits the poor salaryman, she wants him to talk Jiro into marrying the sweet Harue. Though it’s hard for him to swallow, since he’s obsessed with Harue because she reminds him of an old flame, he agrees to talk to Jiro. Feeling guilty about being an irresponsible father—Kihachi at one point tells Tomio to stop studying and go out to play—he gives the child a big sum of money as an allowance. The kid buys sweets and takes sick, coming down with a case of acute enteritus and has to be treated by a doctor. Jiro has to borrow money from their old neighborhood friend, the barber (Reiko Tani), so his friend can pay the hospital bill. Tomio quickly recovers, offscreen. To pay back the loan, Jiro plans to go by boat to faraway Hokkaido, where they need laborers and pay higher wages. But the impetuous Kihachi doesn’t want him to be away from Harue and takes his place instead, but as the boat leaves port he remembers the two corny joke riddles Tomio told him: Why does a human hand have five fingers? The answer: If it had only four, it wouldn’t fit a glove. The second riddle being: Why is sea water salty? The answer: Because salted salmon live there. With sentimentality welling up for his kid, Kihachi jumps overboard and is last seen swimming back to take responsibility for taking care of Tomio.

The film abounds in an authentic period atmosphere. It shows the crowded working-class neighborhood, where the grimy street scenes include imposing views of giant water tanks. It also has rich characterizations of its poor denizens, which are best realized in the father-son relationship. Though it’s grounded in reality, showing the parental relationship through the prism of class conditions, Ozu also has an out of the box laugh as he parodies the Zen koan with his childish riddles that show how the clever child can outwit his simple-minded father and at the same time remind him of his fatherly obligations when he strays. It’s a warmhearted story about how those who are stuck living on the poverty line from paycheck to paycheck would be wise to recognize the importance of education for their children as a means to escape such poverty in the future and stop the cycle of poverty. It might be an old-fashioned story, but it’s a wonderful one and not outdated and needs retelling in modern times by present day filmmakers who might be skilled enough to put it over in an honest way and are cunning enough to get the studios to back them in such a worthy venture that is not in vogue with today’s more jaded audiences. 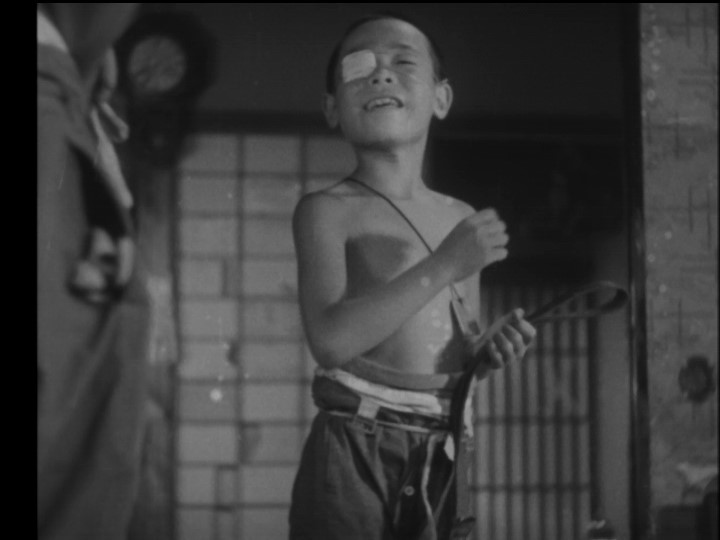