PANIC IN THE STREETS

One of Elia Kazan’s (“On The Waterfront”/”A Streetcar Named Desire”) great but neglected films is this realistic medical noir thriller, set in New Orleans (filmed on location) about an illegal immigrant who brings in the pneumonic plague and the dedicated public health doctor who tracks down the plague-carriers. It’s taken from the story Quarantine, Some Like ’em Cold by Edna and Edward Anhalt (they won an Oscar for original story). The screenplay is by Richard Murphy and Daniel Fuchs.

Illegal immigrant Kochak wins $191 from small-time gangster Blackie (Jack Palance) and leaves the card game complaining he doesn’t feel well. Blackie wants his money back and sends his two flunkies, the obsequious tub of lard Fitch (Zero Mostel) and the nervous Poldi (Guy Thomajan), after him. After trapping the frightened foreigner, a relative of Poldi’s, Blackie comes along and puts two bullets in him and they then dump his body by the docks. In the morgue, the coroner (George Ehmig) discovers that the unidentified body is carrying a communicable disease and notifies Lieutenant Commander Dr. Clinton Reed of the U.S. Public Health Service. Reed informs the mayor and police commissioner they have 48 hours to track down those who have come into contact with the disease or else it could instigate a wide-spread epidemic. Reed also warns them to keep the story from the press to avoid a public panic.

The mayor assigns a resistant and gruff police Captain Warren (Paul Douglas) to find the killers. When the captain doesn’t seem to be taking the doctor at his word how serious the problem is, though he does round up all suspicious characters for questioning, Reed starts his own search for the killers at the waterfront and by offering a reward with his own money (money he was to pay long overdue bills at his wife’s request) he locates the smuggler who brought the illegal in. The dependable police captain and the earnest doctor now team up to hunt down the three killers of the illegal alien, which results in an exciting chase through a dockside warehouse and out on the dock where the rats are captured before they could sneak aboard a ship.

The film maintains its suspense as it cuts back and forth between the lonely figure of the Public Health doctor, dressed in a navy uniform, and the murderers, who can’t understand why there’s such an intensive manhunt over their insignificant crime. It is mentioned that rats are responsible for passing on the disease, and it’s interesting to note how the story alludes to rats as being similar to criminals because they both pose a menace to society’s health. It’s also interesting to note how Kazan implies bringing in suspects for questioning is not a violation of the Constitution if it’s done for the public good (this would hold to his belief that it was OK for the House of Un-American committee to question those it suspected of being Communists).

The top-notch cast all turn in superlative performances. Kazan sharply directs this no-nonsense story in a semi-documentary style that pleasingly captures the action while it also presents an intelligent and imaginative story. 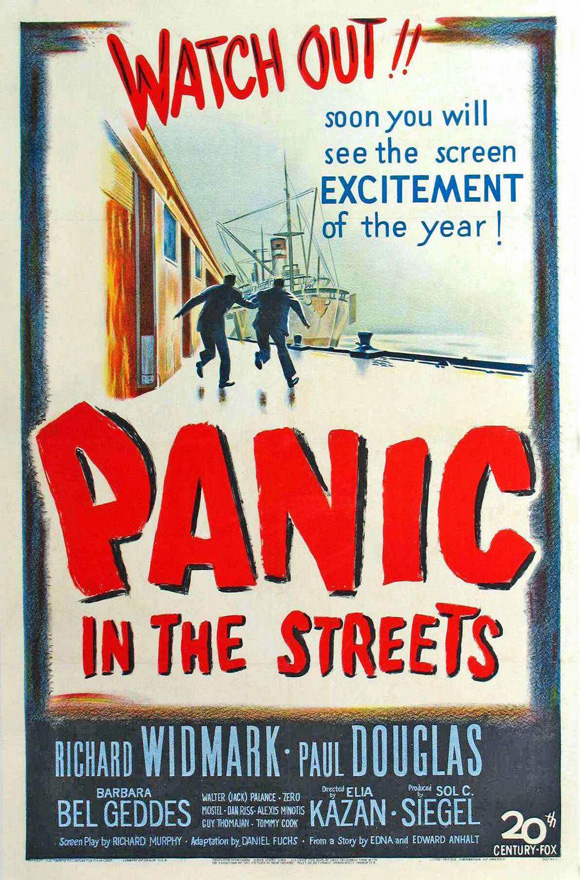