John Sands (Rod Cameron) is a former Texas lawman, who became an outlaw. He’s now reformed and is a respectable storekeeper in Mexico. When he learns through a customer, Jean ‘Dusty’ Stewart (Cathy Downs), his crusading newspaper reporter brother Billy (John C. Champion) was murdered in the town of Sentinel, the wanted man ignores the advice from his friends and crosses the border to track down the killer. The killer is crooked gambler Matt Garson (Reed Hadley), who schemes to run things in the panhandle. The fearful Garson hires three out-of-town gunslingers to ambush Sands before he reaches his Last Frontier Saloon, but Sands outwits them and safely rides into town. He meets the feistyJune O’Carroll (Anne Gwynne), Garson’s secretary, which makes the boss jealous. The next day Sands has an encounter with Garson’s hired gunslinger Floyd Schofield (Blake Edwards) and fends him off. Sands is thereby approached by the leading citizens to become a sheriff and clean-up the town from the land grabbers, but he says only that he will think about it. Meanwhile rancher Dusty tells Sands she was engaged to Billy, and he tells her that he is Billy’s brother.

In the saloon, Sands is provoked into a gunfight by Shofield and two other Garson henchmen . He kills them all in a gunfight. Realizing Garson shot his brother Sands, in a rainstorm, gets into a gunfight with him and kills him. He also promises June that he will return for her. 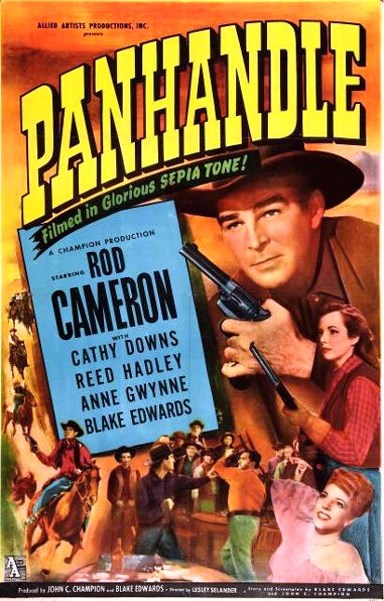