Fassbinder actor Werner Schroeter(“The Reign of Naples”/”Malina”/”The Rose King”) directs and co-writes with Giuseppe Fava this musically rich throughout but overlong stylized opera parable, themed along the lines of Rocco and His Brothers, of the mistreatment of immigrant workers. Of note, the three hour length was edited down from its original eight hour length. If you can fight off the boredom in the stagnant presentation (I couldn’t) and the director’s arrogant belief in his own self-importance that he can without justification insert into the plot a scene of the crucifixion of Jesus during a German courtroom trial for murder, then the pic will pass muster as an aesthetic work even if of questionable value.

The unemployed naive 18-year-old Palermo peasant, Nicola (Nicola Zarbo, non-professional actor), unable to deal with the poor economic conditions in Sicily, after conferring with the local priest who tells him to always be honest and stay away from bad women, ventures from a place where almost everyone sings to a place where singing is not the norm, the industrial city of Wolfsburg, Germany, and finds a job as a guest-worker at the Volkswagen factory. When the lad feels his honor is insulted by his fickle girlfriend (Brigitte Tilg), he defends his honor by fatally stabbing his aggressive two German rival suitors and goes on trial for manslaughter.

After the subdued start in a neo-realism shooting style, quite wonderfully accomplished, in the second half the pic is filled with surreal visions and the more commercial music comes from the factory sounds where the VW is being built. The second act is a long slow grind that becomes a stagey heavy-going theatrical offering in the form of a polemic about Nicola–who is busy making gestures to display his rage and resentment for being exploited by the host country and treated as an inferior. We are left pondering the vastcontrast between the warm Palermo hometown of the young Sicilian and the cold Wolfsburg he once pictured as ideal from afar. Too bad when viewed today, its stereotypical characters are dated.

The film won the Golden Bear at the Berlin Film Festival. 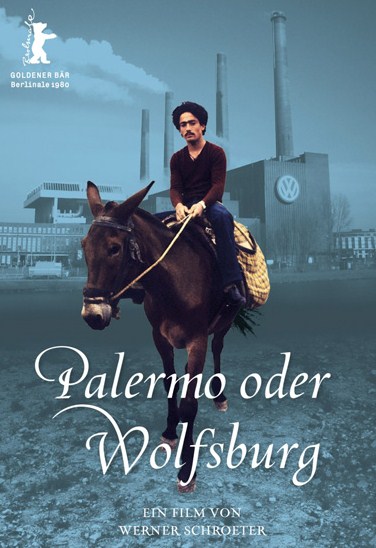