A gripping paranoia political thriller that should make conspiracy buffs excited and provoke even the casual viewer. It’s based on the novel by Loren Singer and adroitly authored by David Giler and Lorenzo Semple, Jr.. Director Alan J. Pakula (“Klute”/”Sophie’s Choice”/”All The President’s Men”) smartly plays it to the post-Watergate headlines dominating the news at the time and to the Kennedy assassination, and with panache stylistically films it (at times, filming behind glass or curtains so we can only get a partial look at the whole scene like the picture a photograph would give us). The Parallax View tells us the government can’t be trusted and the truth can’t always be seen, even when photographed. These paranoid views were all the rage in the 1970s and are probably still believed by a large portion of the American population. It’s a Hollywood film that puts its best foot forward and along with Coppola’s The Conversation (1974) and Frankenheimer’s The Manchurian Candidate (1962), are probably the best mainstream political films ever made.

Investigative West Coast reporter Joseph Frady (Warren Beatty), for a small-time paper, gets convinced after the suspicious death of TV news reporter and ex-girlfriend Lee Carter (Paula Prentiss) that the assassination of Senator Carroll (Bill Joyce), who was running for president and slain by a waiter at the top of the Space Needle in Seattle some three years ago, was not due to a lone assassin as claimed by a government commission delegated to investigate, but by the nefarious security Parallax Corporation that has a recruiting program of undesirables to carry out the assassinations of important political figures it does not favor. Joe discovers that Lee was correct, all the eleven witnesses at the Space Needle are being systematically killed and her death, made to look like a suicide, is believed to be a homicide connected to the Carroll murder.

This nod to the conspiracy theory of the murder of Senator Carroll is the film’s way of letting us know what it thinks of the Warren Commission. The crusading reporter lets only his paternal, honest and dependable city editor, Bill Rintels (Hume Cronyn), know that he infiltrated the mysterious giant Parallax Corporation as a security person when recruited by a sinister agent (Jack Younger), as he does not trust the government law officials and instead tries to get to the bottom of the assassinations on his own without realizing how much he’s in a situation way over his head. Joe will discover, in this more realistic, provocative and bleaker than usual actioner, he ain’t James Bond.

The film’s most memorable and innovative scene is a montageof a five-minute training film that flashes in the dark, for the Beatty character recruit for Parallax, images and words (such as KKK, the pope, Thor; “Happiness,” “love,” “Mother,” and “Me”). 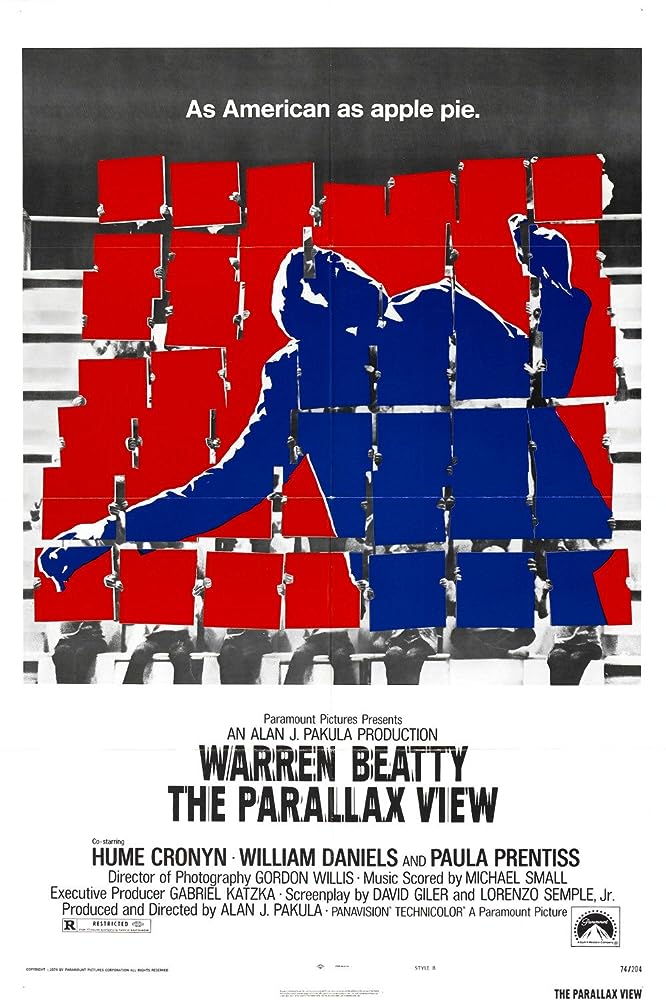