The cowboys of the Old West ride again in this tried and proven Western from Clint Eastwood. It’s the saga about a lone mysterious man representing ‘good’ fighting the forces of ‘evil,’ taking up sides with those who don’t have the strength or courage to stand on their own. When he wins he rides off into the sunset by his lonesome self, stoically ignoring what he hears in the distance — an attractive young hero-worshiping girl crying out that she loves him. This theme has been done better many times before in such films as “Shane (53)” and in Clint’s own “High Plains Drifter (72).”

Pale Rider adds little to the traditional western genre except it is a visually stunning film as photographed by Bruce Surtees, and Clint’s heroics are enjoyable to watch as he unabashedly brings back many of the western’s classic confrontational scenes; such as, the showdown on Main Street and of the helpless man made to dance as the gunslingers fire away at his feet. Otherwise, this is a somewhat disappointing venture not because it isn’t well-acted or directed, but because it is so stale and uninvolving.

A big mine company is feuding with a motley group of independent prospectors who have a legal claim to the one place in this small California town’s territory that they don’t own, Carbon Valley. In an attempt to get rid of them so that they could employ their hydraulic mining operation to rape the entire valley of all its natural resources, the mine owner harasses their camp site and his hired thugs beat them up if they go to town. In one such raid on the prospector’s quarters, a 15-year-old girl, Megan Wheeler (Penny), watches as her dog is killed. Burying the dog, she reads from Revelations: “Behold a pale horse; and his name that sat upon him was Death.” She further prays for a miracle and in the next shot the preacher (Eastwood) rides down from the hills, appearing as if he was a ghost.

Needing supplies, the boyfriend of Megan’s mother, Hull Barret (Michael Moriarty), bravely rides into town alone, and when he comes out of the general store he is attacked by the thugs who work for the mine owner Coy LaHood (Dyson). Silently the preacher appears in town and picks up a hickory stick and smacks it over the attacking gang’s heads, avenging the beating. When Hull takes him back to the camp, profusely thanking him for what he did, Hull’s girlfriend Sarah (Carrie) wants the stranger to leave. She thinks he’s a gunman. But when he takes off his coat and she sees his white collar and realizes that he’s a preacher, she invites him to stay.

The two women are attracted to him, and the preacher must ward off the impulsively inclined Megan’s advances by telling her that she should wait for the right guy her age to come along.

It soon becomes clear, after seeing the preacher’s back scarred from numerous bullet wounds, that he’s on a personal mission of revenge.

The twenty or so independent prospectors feel safe with the preacher around and turn down a chance to sell their claims for a thousand dollars each to LaHood, as the preacher just tells them what the mine owner’s offer is without offering his opinion. But LaHood counters by damming up the creek, thereby preventing them from panhandling and by bringing a vicious marshal, Stockburn (Russell), and six of his deputy gunmen into town to force them out.

In a snit about the preacher’s rejection of her, Megan takes a ride along the big mining company’s site where the owner’s hot-blooded son, Josh (Chris Penn), grabs and tries to rape her just as the preacher comes along and frees her.

For the climax, Stockburn’ men come menacingly into town. They are a rough looking bunch of desperadoes, all wearing long dusters. The gunman-turned-preacher has retrieved his gun from storage and goes after the man who almost killed him once, which results in a classic western shoot-out and a playing out of the revenge theme.

Clint is once again a nameless drifter, a role he could play blindfolded by now. It’s a fine film for those who don’t mind that hero-worshiping is a good chunk of the plot, and that what was metaphorically hinted at never develops because of the film’s awkward presentation. 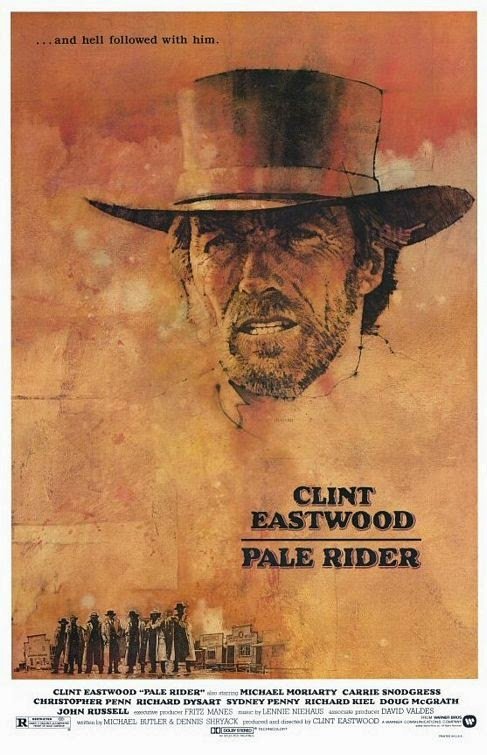