“It seems like film noir told as a war drama.”

It’s based on the play Fragile Fox by Norman Brooks and written by James Poe. Robert Aldrich (“Kiss Me Deadly”/”Ten Seconds to Hell”/”Ulzana’s Raid”) does a great job keeping it hard-edged and realistic. It seems like film noir told as a war drama (it highlights the continuing struggle between the individual and the system that surrounds him). The main focus is on an honest lieutenant heroically fighting both the enemy and an unfit captain, placed in office due to the corruption of power. It’s a fine precursor to Kubrick’s masterpiece Paths of Glory (1957).

The veteran infantry unit from Fragile Fox Company are in France in 1944 fighting a skirmish. The leader of the company, Captain Erskine Cooney (Eddie Albert), is a mentally-unstable coward and an incompetent who was placed in a leadership role by the battalion Colonel, Clyde Bartlett (Lee Marvin), as a political favor. The two country boys are from the same Southern small-town, and the opportunistic colonel is interested in a political future when the war is over and favors the inadequate Cooney because his father is an influential judge who can help him. Cooney, a disappointment to his father, is trying to show him he’s a real man by taking this leadership position.

While a platoon is assaulting a German pillbox Cooney, back in the command post, freezes and neglects to send support to the men as promised. The tough and principled Lt. Joe Costa (Jack Palance) is irate that he lost a number of brave soldiers because of the feckless Cooney and doesn’t see how he could risk the lives of more men under such a cowardly leader. Lt. Harry Woodruff (William Smithers), an average-joe and the film’s voice of sanity, agrees their leader is unfit and tells this to the cigar-chomping Colonel Bartlett between a poker game, hoping to get him kicked upstairs. The competent but cynical Machiavellian colonel is aware of his friend’s faults and tells Woodruff they won’t be sent to the front so just forget it. But the Germans counterattack and Fragile Fox Company is caught in the middle of the Battle of the Bulge. As ordered by the captain, Costa crosses an open field with a group of men to test the enemy strength after given the captain’s word he’ll support them. Costa warns him if he fails again, he’ll come back to shoot him. Things go wrong immediately, as the SS troops have Costa’s men pinned down and only a few survive taking shelter in a farm house. There they kill a sniper in the church’s bell tower and capture two Germans, learning they are up against a heavily mechanized Panzer unit. When Costa calls for support, Cooney again chickens out. The surprise is that Costa miraculously returns to the command post to make good on his threat to kill Cooney and is now seething with rage that he lost as many as nineteen men because of Cooney’s cowardly act.

For Aldrich, this is a personal film and one he said was meant to be a “sincere plea for peace.” He said “War has a terribly corrupting influence on the most normal, average human beings, and the terrible things it makes them capable of that they wouldn’t be capable of otherwise.” The film ends as a moral study in integrity in the face of going against self-interest, as it proves to be far more than an action film. It should also be noted that the military was not pleased with the film and refused to cooperate in the production. 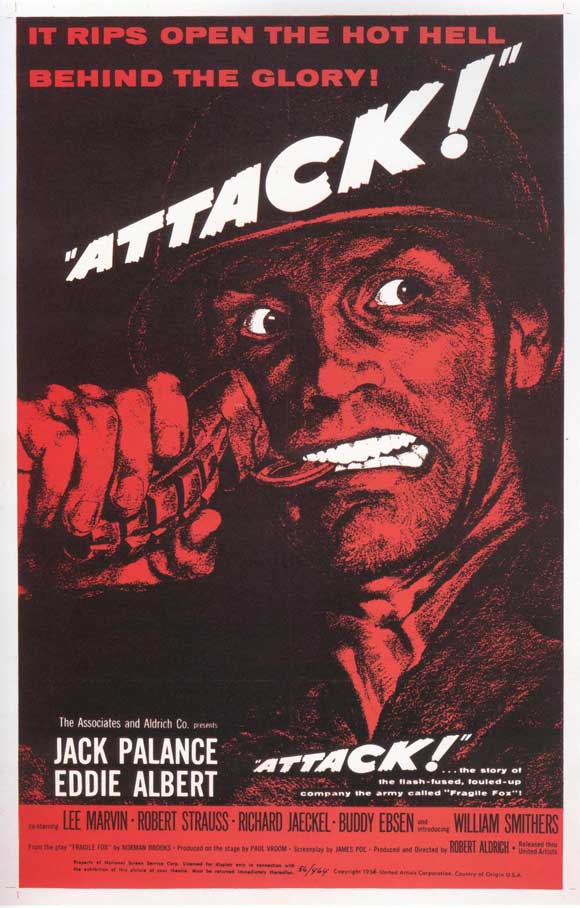